The Morning After Recap: Tuesday, November 29

Share All sharing options for: The Morning After Recap: Tuesday, November 29

Today marks the tip of the two-day ACC/Big Ten Challenge, a media-fueled event that probably doesn't mean quite as much in terms of conference supremacy as we'd all like to hope. But this year's slate still features some must-see matchups, so it might be a smart idea to stay glued to your television over these next two nights.

The headliner for Tuesday is a can't-miss battle between the Duke Blue Devils and Ohio State Buckeyes. This is every bit the type of Final Four preview that we yearn for this early in the season, and if you're going to catch only one college game this week, make sure it's this one. The 1-on-1 matchup between Mason Plumlee and Jared Sullinger will undoubtedly catch our eye right off the bat, and we're interested to see just how tough the Dukies really are on the interior, and whether Sully can use his posterior (see what I did there) to create space.

Along with a handful of ranked teams in play tonight, we're proud to announce a minor re-touch of this here recap in today's edition. The category headings look rather sexy, no?

* So apparently the KFC Yum! Center is not haunted by Casper. This is good to know. (Louisville Courier-Journal)
* The always-dangerous Golden Grizzlies stole one from Tennessee for the second straight year (Detroit News)
* Breaking: Now we can safely say that UCLA is actually better than Pepperdine (LA Times)

* Not exactly a promising 2nd half collapse by Kevin Stallings' team against Xavier (Anchor of Gold)
* Uh-oh: The Heels might not have Harrison Barnes for Wednesday's showdown with Wisconsin (Beyond the Arc)
* Serious question: Has the hype surrounding a Georgetown team ever been this muzzled? (Casual Hoya)

Oakland - The Grizzlies have always been a tough out, but it was understandable to see them fall off without superstar big man Keith Benson this season. In his stead, lightning-quick guard Reggie Hamilton has picked up the pace, pouring in a career-high 35 points to beat the Vols last night.

Georgia - The only thing worse than a bad Pac-12 team is a program that loses to it. Georgia led Colorado by two at the break behind some hot 3-point shooting, but then started laying bricks and fell flat in the second half. Mark Fox, on droughts: "Unfortunately, we started the second half with one."

Rob Jones-Saint Mary's - Jones was The Man in a crucial win over Weber State, recording 24 points, 12 rebounds and a pair of blocks. But it was his shooting accuracy in 39 minutes of court time that was most remarkable. Jones nailed 8 of 12 from the field and was a perfect 4 for 4 from deep in what was his most efficient game of the season. The 6'6" senior bumped his averages to 18.0 points & 11.4 rebounds, and has yet to finish a game with a shooting percentage below 50%. Not too shabby.

ZERO - Free throws attempted by Pacific in a 42-point loss to Stanford. We knew the Cardinal was stingy, but this is stunning. 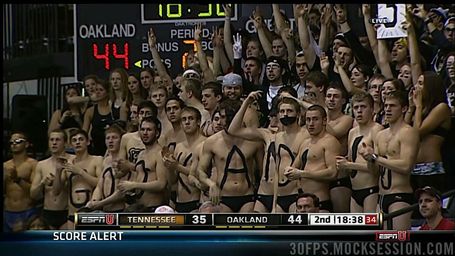