The Morning After Recap: Wednesday, November 30

Share All sharing options for: The Morning After Recap: Wednesday, November 30

With the NBA actively seeking a change to the NBA Draft's minimum age limit, it looks as if the college game is on the verge of becoming talent-rich without actually doing anything. ESPN's Rich Bucher made it clear yesterday that if and when a change does happen, it will probably be two years away, so at least we'll see it coming. That bodes quite well for guys like Anthony Davis, Brad Beal and Marquis Teague, but not for the thousands of current high school players making names for themselves right now that will ultimately have to live under the new rule.

The two-and-through concept seems like a decent plan, but you wonder if essentially locking these kids into mini-contracts will make some re-think the entire college process altogether. The amount of interest paid to American players by overseas pro leagues remains high, and even though most would agree that Euro ball is not the most glamorous life, especially two years of it, the allure of cold, hard cash is one variable that isn't going away.

The NBA holds the power to alter the way talent is dispersed among college programs, and that's a ridiculously scary thing to give a bunch of guys who absolutely blow at decision-making. Overseas basketball was viewed as a viable threat to the NCAA's players a few years ago after Brandon Jennings bucked the trend, but it has stayed mostly dormant since. If the two-year rule is enforced, however, then it's entirely possible that a portion of kids with eligibility issues or immediate hopes of financial gain might never set foot on a college court.

* Yet another Oregon freshman, Bruce Barron, has left the team and plans to transfer (The Register-Guard)
* Quincy Acy is happy to have PJ3 back: "Always good to have the young fella playing with me. He changes the game in so many ways." (Houston Chronicle)
* Jim Boeheim won a game by 36 points, and nobody in the media seemed to notice (The Post-Standard)

* Five assists as a team just isn't going to cut it. Ever. Maryland has a pass-first guard deficiency. (Testudo Times)
* Strong victory for Clemson. And another "I-don't-know-what-is-going-on-here" loss for Iowa. (Shakin' The Southland)
* Michigan guard Trey Burke: "We haven't seen a team play the pick-and-roll as good as Virginia." (USA Today Campus Rivalry)

Ohio State - The stage was set, and the Buckeyes came out and delivered an elite-level performance. No team made a bolder, more profound statement on Tuesday, and any early-season questions about Thad Matta's squad need to be put to rest. This is an exceptionally dangerous basketball team.

St. Louis - Tired legs might be the culprit here, but pollsters won't look too kindly on a 75-68 loss to Loyola Marymount when it comes time to fill out another ballot. This is simply awful timing for the Billikens to drop a winnable game, and it's unlikely Rick Majerus' team will be able to hang onto its top 25 spot.

Perry Jones III-Baylor - The future lottery pick wasted little time tossing his name in the mix for national player of the year, scoring 27 points on 10 of 14 shooting in his 2011-12 debut. His 77.8% mark from the foul line could also be a sign of better things, as the 6'11" forward was quite erratic from the stripe for most of last season (66.4%). Bold prediction: This isn't the last time Mr. Jones makes an appearance in this spot. 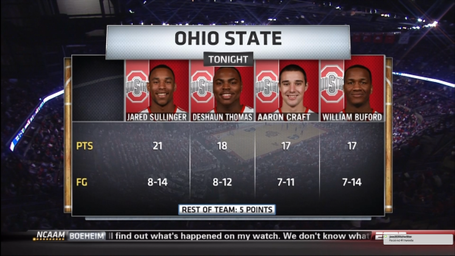