Expectations for power conference programs have changed over the years. Nowadays, athletic directors aren't too keen on casually sitting back to watch their program underachieve on a national stage. Nope. Not like they used to. Make no mistake about it, coaching turnover is at its peak in the college game. Cellar-dwelling coaches take note: The axe could be coming for you next.

It seems that for every up-and-coming coach ready to leap to a larger program there's an annoyed athletic director itching to pull the plug on his rocky three year coaching marriage. And unless you are unloading conference or national titles every few years or happen to own a golden ticket to the Hall of Fame, you probably won't be able to escape the wrath when things start to get ugly.

Even though it is more of a 'lukewarm seat' at this point in the year, here are five power conference coaches that need to get their act together quick:

Weber is easily the most successful coach on this list, and it's hard to argue with the fact that he's won 20+ games in seven of his eight seasons with the Illini. With that said, fans are startling to get restless in Champaign. Weber's first four seasons with the team were golden (112 wins, four NCAA appearances), and basically resembled what the program was both capable of, and wanted to achieve on a yearly basis. But the last four years have been less impressive (81 wins, two NCAA appearances), and it seems this program has shifted from a national title threat to an annual bubble watch contestant right under Weber's nose. It is perfectly logical for administrators to be concerned about this latest trend, and while it might be somewhat hard to imagine Weber getting canned, he still faces a significant amount of pressure to deliver an NCAA berth in 2012.

Nobody said it would be easy. Then again, nobody figured it would be quite this bad, either. Bzdelik is the only man in America to post a 1-15 conference record with two different schools over a three year span, which is both awesome and flat-out embarrassing at the same time. Even though he's entering just his second season with the program, things are shaping up to be comparably underwhelming yet again for the Deacons in 2011-12. Wake's decision to bring him aboard was peculiar when it happened, and it's hard to imagine he has a long leash coming off a year where his team broke records for the most losses in both ACC (15) and Wake Forest (24) history. If the ACC is really as soft in the middle as we think it is, then Bzdelik will definitely need to show something in year two to keep his job security in check.

I've talked at lengths about Robinson's downward spiral since taking the job up in Corvallis, and by all accounts he's a great leader and a fairly decent basketball coach. But Oregon State simply isn't winning games. In a conference that has been wide open over the last three seasons, Robinson followed his 18-win, CBI title campaign with 14 and 10 wins respectively. He's going in the wrong direction at a program that has no reason not to be competitive. And while his 2011-12 roster is supposedly his best to-date, Pac-12 coaches still picked the Beavers to finish eighth in the conference in the league's preseason poll, and even that might be overly generous. Brother in-law to the President or not, if year four of the Robinson experiment shows further regression, then it might be time for Oregon State to cut its losses and look for a coach with a proven track record of success instead.

We know it takes time to build a broken program back up to powerhouse status. But in Tom Crean's case, how long is that going to be exactly? With three seasons of Big Ten hoops under his belt, Crean has won exactly eight games in conference play. And that win total alone, if it came during one season, still might not be enough to get the Hoosiers to the dance. Look, Crean is on a vastly different level than a guy like Craig Robinson because he's recruiting like a madman for a historic program and can point to his record and say his guys are actually improving. But the expectations in Bloomington are through roof every single year, and another serious letdown won't exactly make Crean the most likeable guy in the state. Big time recruits like Cody Zeller might not have enough time to save Crean's job unless they make a significant impact right away, and that's the hardest part of it all. Much of this talent he's assembled as of late could conceivably blossom without him there to see it, and that would be a shame. 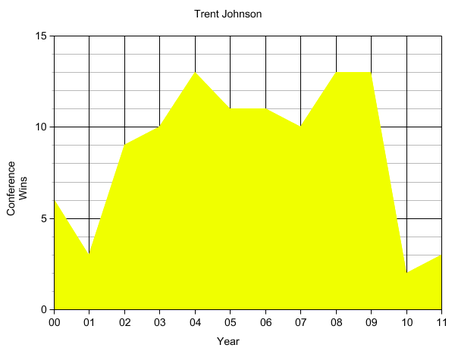 The handy graph at right shows Johnson's success in conference play throughout his coaching career. This is a man who has won double digit league games in seven of his 12 seasons as a coach, and has had, for the most part, a very successful career. The problem here is that Johnson is on a legendary cold streak, and the foundation at which he stands is on the verge of collapse. Five total wins, and a pair of last place finishes in the West division are not things a coach wants on his conference resume over a two-year span. The good vibes generated from Johnson's 27-6 inaugural season with the Tigers are a distant memory, and a third straight year of utter embarrassment could seal his fate.