Share All sharing options for: Sean Miller is still an ardent Xavier supporter 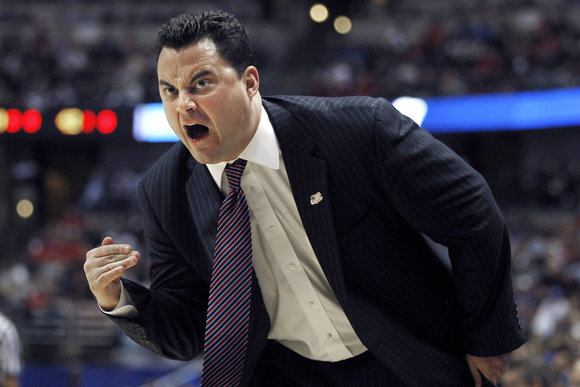 There's no question that Xavier is one of the best when it comes to propelling promising young coaches to larger schools: Pete Gillen to Providence, Skip Prosser to Wake Forest, Thad Matta to Ohio State and, most recently, Sean Miller to Arizona.

Retaining their services for a long period of time is another story, but there's always been evidence that when these guys move on, they save a little space in their heart for the Musketeers.

Miller, the latest coach to up and leave Victory Parkway, was brutally honest to the media when he learned about Saturday's Xavier - Cincinnati brawl, showing complete support for his former team to the point that I think he's secretly interested in scheduling a home-and-home with the Bearcats solely to deliver a haymaker to Mick Cronin.

From the Arizona Daily Star

And if he supports to malice to close out the Crosstown Shootout...

"I'm proud of those guys, I really am," Miller said of Xavier, his former team. "I would fully expect there to be a fight."

Surely there are some XU fans that carry some level of animosity with them towards Miller, but if you can't not loathe this firecracker of a coach just a little less, then you're not thinking straight.

Clearly, Miller was fully in tune with the message Tu Holloway and Mark Lyons attempted to articulate during their postgame press-conference. Using the term "gangsters" to describe toughness was a language Sean Miller spoke, and I'm happy to see him continue to vocally support the school that gave him his first head coaching gig.