The Morning After Recap: Tuesday, December 13

Share All sharing options for: The Morning After Recap: Tuesday, December 13

Hello buzzer beaters. Somebody must have flipped a switch or something, because all of a sudden last-second shot attempts are tickling the twine at an alarming rate. Not that we're complaining or anything, but this is starting to get a tad ridiculous. You know, ridiculous in a we-hope-this-happens-like-twelve-more-times kind of way.

Christian Watford's brilliant shot to sink No. 1 Kentucky and Big Blue Nation on Saturday set things in motion. Then Arizona State ended up snagging a buzzer beating win of its own later in the same day. And last night, after being controlled for roughly 35 minutes, Oral Roberts and Damen Bell-Holter helped produce the most unbelievable sequence of the college basketball season (scroll down for video).

As far as degree of difficulty is concerned, we can't remember a shot quite this impressive in recent memory. All of those Sportscenter clips you see of kids throwing baseball-style heaves from the baseline are usually with teams that have no relevance. But considering that Oral Roberts might just win the Summit League this year, that doesn't appear to be the case.

Three buzzer beaters in 72 hours? Yep, we can handle this.

* Oregon's Dana Altman on the injury to senior Tyrone Nared: "He’s going to be out for a while. The next four (games) for sure." (The Register-Guard)
* A surprise call from grandmother sparked a career night for Rutgers' Dane Miller (The Star-Ledger)

* Yancy Gates issued a tearful apology for his actions over the weekend (GoBearcats)
* Gary Parrish will find you, and exposure your faulty voting logic: How a South Carolina writer left Xavier off his top 25 ballot (Eye on College Basketball)

Oregon - The lead-up wasn't pretty, but the Ducks shot a perfect 10 for 10 from the foul line over the final 4:30 in a win over Portland State. Dana Altman was critical of his team's ability to close out the game, but Oregon is now 5-0 at home and will play host to a defensive-minded Virginia team on Sunday.

Arkansas-Little Rock - [see video below] A heartbreaking way to lose. Going down on a well-crafted buzzer beater is one thing, but a lucky one-handed flail from about a mile away is something else entirely. What makes this loss even worse is that the Trojans led for almost the entire game, and it wasn't until the 1:26 mark of the second half when Oral Roberts actually took the lead back.

Tristan Carey-Longwood - On a night when his school scored 110 points and nailed a whopping 20 3-pointers, Carey was easily the brightest star on the court. The sophomore tallied 30 points, seven rebounds and six assists, and was 6 of 12 from behind the arc. Oddly enough, Carey entered the day averaging just 9.4 points on the season, and was coming off a poor showing against Virginia (2 for 7, 6 pts) nine days earlier.

64 - Margin of victory for Louisiana-Lafayette against the Dillard Bleu Devils (seriously). 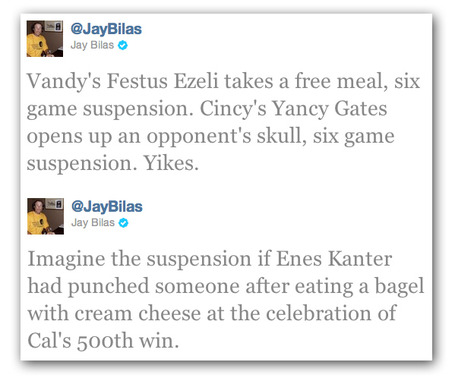