The Morning After Recap: Thursday, December 15

Share All sharing options for: The Morning After Recap: Thursday, December 15

Exhale if you wish. It will take a little patience, but Jared Sullinger and that nagging back are going to be just fine.

The concern over the most important case of back spasms in college hoops has been tremendous as of late, with some even proclaiming that it might be a nagging issue throughout the season and therefore diminish Ohio State's title chances. But in his first time on the floor after sitting out two weeks, the All-American was visibly off his game and still managed to post his fifth double double of the year (12 pts, 10 rebs). That takes talent.

The impressive stat line was certainly a good sign right off the bat, but his body will need another game or two before he's truly the guy we're used to seeing out there. "I was tired," Sullinger said after the game. "Taking two weeks off is killer."

The Buckeyes still have three remaining non-conference games left before a December 28th date with Northwestern kicks off their Big Ten season. In the meantime, look for Thad Matta to play it as safe as possible with his sophomore center, and if that means limiting minutes on days where his back is not feeling 100% in the morning, then so be it. Because aside from a trip down to South Carolina this weekend, the Buckeyes are in a position to continue easing Sullinger back into his role without having to worry about losing a game in the process. An ideal scenario, if you will.

* Princeton's Mack Darrow made one shot on Wednesday: A 3-point buzzer beater in OT (The Daily Princetonian)
* Sullinger on his first game back: "Obviously today I was very, very out of shape." (The Plain Dealer)
* Scott Machado hosted a free clinic on how to draw, and dish out of, a double team (Richmond Times-Dispatch)

* It's a shame nobody told Charleston fans just how utterly terrible Tennessee is this year (Rocky Top Talk)
* Stunning: UCLA refused to put away Eastern Washington in a slop-tastic win (Bruins Nation)
* Maryland almost ends its season prematurely by dropping a game to Isaiah Thomas and that Florida-team he coaches (Testudo Times)

Princeton - The Tigers added yet another another buzzer beater to our season tally on Wednesday, nailing a desperation three in overtime to sink a one-win Rider squad. Princeton is currently 3-1 on its seven-game road trip and will face Northeastern this Sunday.

South Florida - It takes an extremely brutal shooting performance for a team to barely cross the 40-point barrier, but the Bulls needed every last second to clear that mark last night. Without a doubt, yesterday's "battle" between Auburn and USF was one of the most miserable games of the season, and we sincerely apologize to anyone who watched the entire thing. At one point late in the second half South Florida bricked 14 of its previous 18 shots and yet still somehow had a puncher's chance at winning.

Scott Machado - Kendall Marshall who? Iona's Superman turned in another mesmerizing night with 13 points, six rebounds and 15 assists in a key win over Richmond. The stud point guard only gave the ball up twice in 36 minutes, with one coming just 1:58 into the game and the other while his team was up 15 with three minutes left. Yeah, he's pretty good.

0 - Free throws attempted by Tennessee in the second half vs. Charleston. Can't miss 'em if ya ain't shootin' 'em, right? 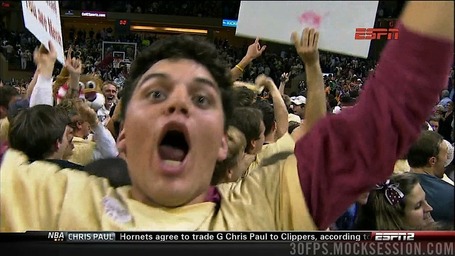