The Morning After Recap: Friday, December 2

Share All sharing options for: The Morning After Recap: Friday, December 2

Another night at Rupp. Another beating. Haven't you heard? John Calipari's Kentucky Wildcats are the No. 1 team in America for a reason. But it goes further than that. These guys aren't simply beating cupcakes. They are de-pantsing BCS conference schools right in front of national audiences. It doesn't happen every single time out, but when it does and everything clicks, LOOK THE HELL OUT. Are you getting all of this, North Carolina?

It's hard to believe any college program truly enjoys getting trounced by a bunch of NBA players, but it's safe to say this will probably become a trend in 2011-12. This team is so ridiculously good, and so ridiculously talented right now, that it actually brings to mind the 2007-08 North Carolina Tar Heels squad and how we basically anointed them national champs before that season even tipped off. And come to think of it, look at how well that turned out. Like it or not, the 'Cats are giving off a similar vibe this season.

With the way Calipari has recruited since taking over in Lexington, we always had this feeling that it would only be a matter of time before he marched on to a title game and cemented his legacy the proper way. And this current roster, with a freshman class that honestly feels like his best to-date, definitely has the wherewithal to get it done. Take Anthony Davis away and we're still talking about one of the best teams in the country. And that's the scary part.

* Hello, defense: Harvard held an opponent under 50 points for the fifth time in seven games (The Harvard Crimson)
* DePaul sophomore Brandon Young: ‘‘I’m disappointed because we had it. We all missed free throws. We have to make them in crunch time." (Chicago Sun-Times)
* Texas A&M CC revealed a new, upgraded mascot at half vs. Texas Tech, and then nearly pulled off a shocker (Corpus Christi Caller-Times)

* Normally a power conference school doesn't pummel another into submission. Kentucky is not normal. (A Sea of Blue)
* Is it time to jump on the Georgetown bandwagon? 'Big Shot Hollis' has a nice ring to it. (Casual Hoya)
* Pittsburgh might not have Tray Woodall, third in the NCAA in assists, for Saturday's game vs. Tennessee (Beyond the Arc)

Georgetown - The Hoyas really needed Thursday's game over Alabama to both put things in perspective and help legitimize their win over Memphis last week. And aside from a near-blunder at the end of this game, John Thompson III looks to have a very underrated squad on his hands. Remember, these guys are 6-1, and that only blemish was to Kansas by a measly four points. How can you argue with a pair of wins over top 15 competition this early in the season?

St. Bonaventure - Now this was unexpected. The Bonnies fell to an Arkansas State team that actually scored 27 points in a real game this season. Yuck. Star forward Andrew Nicholson isn't helping things at all, and has just 15 points combined over the last two games. To really put that in perspective, consider that Nicholson dropped at least 15 points on 23 occasions last season.

Terrence Jones-Kentucky - Along with posting season-highs in points (26) and steals (4), Jones finally figured out how to get to the free throw line. After Kentucky's first six games Jones had a confusingly-low eight free throw attempts. Tonight he had 16. That's assertiveness.

50 - Total possessions in Cleveland State's 45-43 win over Horizon League foe Wright State. The Vikings entered the day averaging 67.1 possessions per game, and are luck to avoid a disastrous loss. 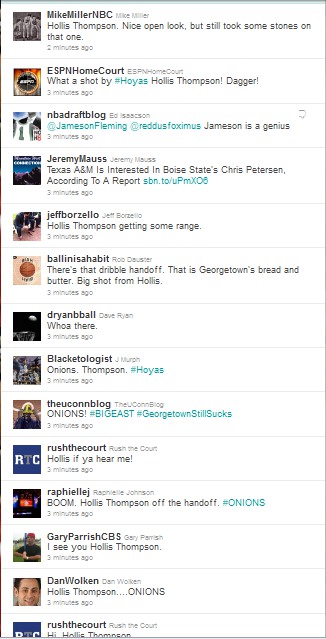 Click to watch Darius Miller do something OOPtastic (h/t Gifulmination)