Share All sharing options for: Campbell's Eric Griffin is an ultra-accurate, diverse scorer

Eric Griffin. He plays for Campbell. You've probably never heard of him. But there's still time to fix that.

The No. 1 reason you should add Griffin to your radar is because the senior forward happens to be shooting 70.6% from the field after seven games. Yes, there might be six guys above the 70% mark and another dozen hovering around 66% as we speak, but Griffin is truly a special case. Because with all of the towering presences and role-playing big men competing with him in the field goal percentage race, Griffin stands at 6'8" and weighs in at a generous 190lbs. And you just know we have a soft spot for the little-big-men of college hoops.

Take the nation's top 40 field goal percentage leaders right now and put them all on the table. Nobody scores more points than Griffin's 19.4 per game. And only ONE of the 40 has taken more shots than him so far. Video game numbers like 70.6% and 19.4 ppg are so extreme in opposite directions that it's hard to believe they come from the same player.

So really, how does he do it? A wing forward that hits the glass hard and happens to be making almost everything he throws at the rim. A guy that hauls down 9.3 rebounds and swats 2.9 shots per game? How does he do it? Just like all the big guys (a la Anthony Davis) that surround him the rankings, Griffin is probably getting a ton of ridiculously easy buckets on dunks and put-backs, right? Makes sense.

To find an answer, I went back to my recent experiment with result-specific possession stats and put Griffin's season to-date under the microscope. The results were surprising: 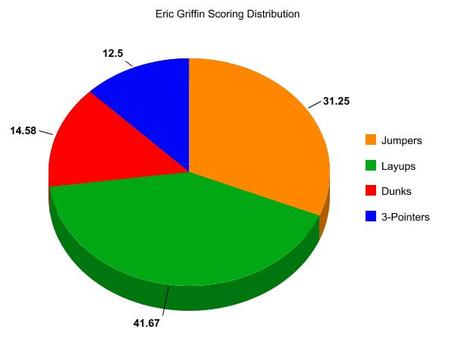 So much for that dunk-dunk-dunk theory. Not many players in the country who will compete for the FG% crown are hitting threes as often as they throw down dunks. Nor are any of them likely to take as many high-risk jump shots. Griffin is legitimately a unique case, and it's going to be interesting to see whether he can keep this pace up. Clearly, common sense would agree that his accuracy level will inevitably decrease as the year wears on. When you're scoring nearly 50% of your points on jump shots, something has to give.

The Campbell Fighting Camels are 6-1 with a notable 16-point drubbing of Iowa in the rearview. An upcoming December 17th meeting with Virginia Tech will probably be the next time you'll hear about this team, but in the meantime, make sure to keep an eye on Griffin. The kid can ball.