The Morning After Recap: Tuesday, December 20

Share All sharing options for: The Morning After Recap: Tuesday, December 20

Two things that college basketball fans don't usually get to see very often, buzzer-beaters and brutal on-court violence, took place in the exact same game last night. It doesn't take a detective to deduce that something strange is going on here. It used to be maybe a handful of minor scrapes over the course of a season, mainly with stuff like harmless pushing and shoving and name-calling. But in 2011-12 we've already witnessed one of the worst brawls in recent memory after the dust-up between Xavier and Cincinnati, and then sat in awe as a buzzer-beater knocked off the No. 1 team in the country. Things have been wacky.

For whatever reason, the floodgates are open, and buzzer beaters, fights, and some of the most unexpected sequences in the sport are somehow starting to pop up all over the place. Then again, maybe it's always been like this, only on a much smaller scale. Or maybe it hasn't, and Arizona State and Southern Mississippi's game from last night was a perfect example of the type of product that college hoops has become. Whatever the case, a good deal of blame for the violence needs to be placed on the referees calling these games.

Emotion runs high in college basketball, and with many key players in the 18-to-20-year-old range, it's easy for a frustrated kid to lose his temper and do something regrettable. Often times the retaliation part of these exchanges can be altered by the refs coming stepping in to separate, or simply by calling immediate fouls on anybody involved before an issue transpires. A quick technical would send a strong message to any player desperately trying to elbow, or punch, his opponent in retaliation after having the same thing done to him.

Currently, the refs in college basketball are a mixed bag. With so many schools, it's hard to have consistency across the board. But so many of the refs we've seen are the 'hands-off' types, and are usually not going to intervene in a situation unless it has already escalated to Xavier/Cincinnati-level. These are supposed to be the resident policemen of the sport, and yet, they don't seem like they do enough to stop terrible situations from occurring. It's not an easy fix by any stretch, but it's about time to re-evaluate what a referee needs to be looking for so maybe, just maybe, we can stop some of this junk before it gets ugly.

* The best possible way to end a game featuring a near-brawl? A buzzer-beater. (Tuscon Citizen)
* John Henson's line in the Tar Heels' 99-49 win: 21 min, 7 pts, 11 rebs, 7 blks (Burlington Times News)
* Bill Self on losing to Davidson: "I don't know if you take as much from this game as those other games. Because this team's not that good. That wasn't an upset tonight." (Kansas City Star)

* LSU committed 18 turnovers and went 14-of-27 from the FT line, and still knocked off unbeaten Marquette (And The Valley Shook)
* The Big Ten is the best conference in America according to ESPN's handy chart. The Pac-12? Eighth. (College Basketball Nation)
* At 2-8, Idaho State coach Joe O'Brien resigned on Monday. Could it be because he lost to Utah? (Eye on College Basketball)

Marshall - Hosting a supremely dangerous Belmont team at home, the Herd rode out a slim victory behind 29 points from sophomore leading scorer DeAndre Kane. Marshall also has wins over Cincinnati and Iona this season, and travels to Belmont for a rematch, and the other end of this home-and-home, in nine days.

Kansas - Not only was it Tyshawn Taylor's first game back, but the Jayhawks now have to deal with that whole 'mid-major loss' thing again. This all sounds great for the anti-KU brethren, of course, but this time it was Davidson that stunned Bill Self's team, and it's going to sting for a while. The culprit? The Jayhawks shot 18-of-31 from the free throw line, and lost the game by only six points.

Doug McDermott -Creighton - Take it away, Tulsa coach Doug Wojcik: "[McDermott] single-handedly broke the spirit of my team, particularly my post defenders. He was shooting jump hooks over (6-11) Kodi Maduka, who is long, and I don't think he even saw the basket." McDermott finished with a career-high 35 points on 16-of-23 shooting, and somehow managed to tie a season-low with just two 3-point attempts.

30 - Offensive rebounds snatched by North Carolina in a 50-point shellacking of Nicholls State. Five Tar Heels each totaled at least four rebounds off the bench. 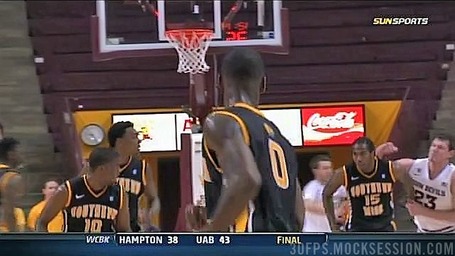