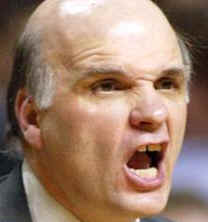 There's really no other way to put it: Todd O'Brien should be playing basketball for UAB right now. Instead, the well-traveled big man is more or less a redshirt graduate student, available to practice and take part in team events, but never allowed to actually get on the court. To many, this feels like one big joke.

The situation becomes a lot more real when you notice O'Brien sitting idle on the UAB bench, trying to act interested as he watches the final year of his basketball career evaporate into thin air. And all because of a stubborn old coach who can't seem to let go of an invisible grudge. Looking out for the best interests of our student athletes, are we? Of course we are.

We already heard O'Brien's side of the story, and it's awfully hard to not form the opinion that St. Joe's head coach Phil Martelli is a pretty awful person, who is hell-bent on sticking it to a player who dared to transfer from his illustrious program. How else can you possibly digest this quote?

"Regardless of what the rule is I'll never release you. If you're not playing basketball at St. Joe's next year, you won't be playing anywhere."

Pathetic. Hopefully prospective recruits are paying attention and will think twice before willingly signing with a man like this. Remember kids, if you ink with Martelli, he's going to do everything in his power to make sure you pay if you ever decide to leave his school when he doesn't want you to. He might throw you under the bus, cut your minutes and keep you off the court to force you into that decision all on your own, but he's the guy who'll walk away with clean hands.

There has to be some sort of committee that can deal with something like this. Somebody to step in and offer a bit of logic in an otherwise illogical situation, right? Lo and behold the NCAA Basketball Ethics Committee, which sounds like the ideal entity to make a passionate plea for O'Brien's reinstatement. Oh yeah, one little problem: Martelli is in charge of this so-called ethics committee. Pottle. Kettle. Black.

Here's the thing: Whatever the issue is that is keeping Martelli from granting O'Brien his release is 100% irrelevant here. O'Brien is a student athlete first and foremost, and he's actively trying to get his master's degree at a school that offers the courses he's interested in. That's it. The basketball stuff is all secondary. If O'Brien had transferred to a rival A-10 program, then maybe Martelli's actions would have a shred of merit. But we're talking about schools from different conferences that do not play each other.

O'Brien's telling article on Sports Illustrated was an eye-opener for many, and it definitely shed some light on the strange rules that are in place for a transfer to happen. But O'Brien's story has already been told, and it's out of his hands now. The spotlight now shifts directly to Martelli, who has still not given a viable reason for the laughable denial of his ex-player's release. Because until Martelli actually speaks to the issue without legal talk getting in the way, his program, and the way he operates it, should be viewed as a complete embarrassment.