Breaking down breakdowns, and why everyone is doing them this college basketball season

Share All sharing options for: Breaking down breakdowns, and why everyone is doing them this college basketball season

I'm noticing a growing trend amongst my college basketball blogging brethren and superiors...and I don't know where it spawned from.

What once was a place for bad jokes, pithy commentary and dunk-heavy YouTube videos has given way to some actual analysis of the game of basketball.

Done flawlessly by Sebastian Pruiti and Josh Riddell, the art of breaking down a team's offensive sets or individual match-ups through screengrabs and short video clips is difficult. First you must know how to stretch your writing, second you must have spent some time around organized basketball at some point in your life.

Again, I can't pinpoint why (do you have a big ego or something), but in the last five weeks three guys are mimicking Pruiti and Riddell, offering their doing their own form of offensive and/or defensive breakdowns; thoroughly explaining the game with in the game.

Ballin is a Habit's Rob Dauster, CBSSports.com's Matt Norlander, and our own Dave Ryan apparently feel as though they're the next frieken Hubie Brown, eager to publicize their versatility in this blogging game.

Instead of beating or even joining this trio in their endeavors (I would be awful at this stuff), I've decided to mock them.

Let's compare and contrast their work...

Immediately, I suspect this will not be Matt's best work. The ALL CAPS clearly suggests he's overcompensating for something in the analysis that's to follow. 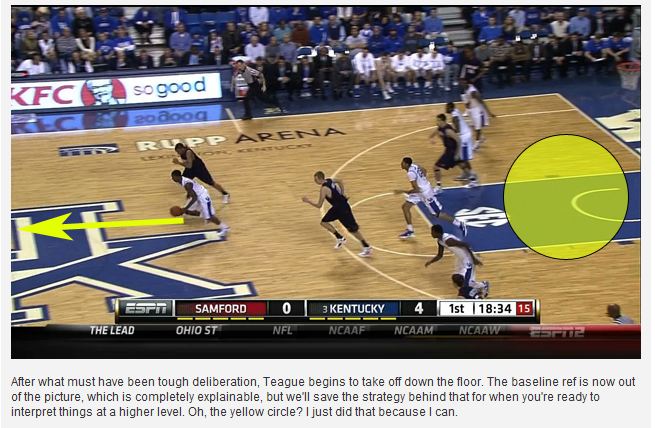 My pre-conceived notions could not be more wrong.

A mention of how awesome that 66 percent transparent yellow circle is!

I'm loving this so far. 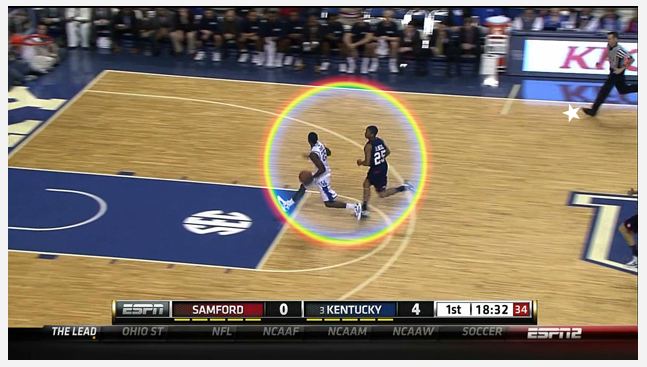 The hits keep coming. I've been completely blindsided - in awe, really - by this rainbow circle. Matt is LOLing his way through the post, gitty at the thought of hitting PUBLISH to showcase his Microsoft Office skills to all his Twitter followers. 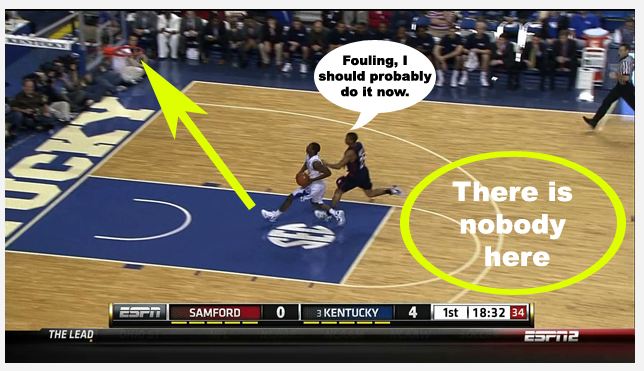 With every flick of the computer mouse, I'm more hypnotized with Matt's work. At this point I've forgotten what the piece is even about. Is that Jeff Teague or Marquis Teague? When did Stanford visit Rupp Arena this season?

In all seriousness though, Matt is balancing light jabs with credible analysis on Kentucky's transition offense. He's hitting on all cylinders.

To conclude, Matt reminds us that he's a newbie to this sort of stuff, paying homage to the man that has perfected breakdowns. Lot of respect here, and I hope to see these types of post continue.

One of the hardest working teeth-cutters around, Rob has been diligent this season with his "Breaking Down" pieces. They're basically branded, and even after his first attempt early in the season you knew this was going to be a recurring thing.

It's excellent link-bait for fans of the team he's writing about. 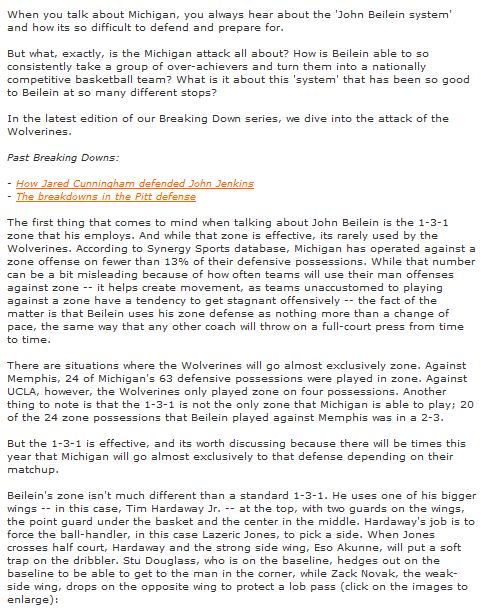 We all know Rob is a content machine. Legend has it be published seven articles on three games in one hour.

Naturally, he gives us a 400 word introduction on the Michigan Wolverines 1-3-1 zone. That's a lot, but probably was typed out in 49 seconds while his cat looked on in amazement. 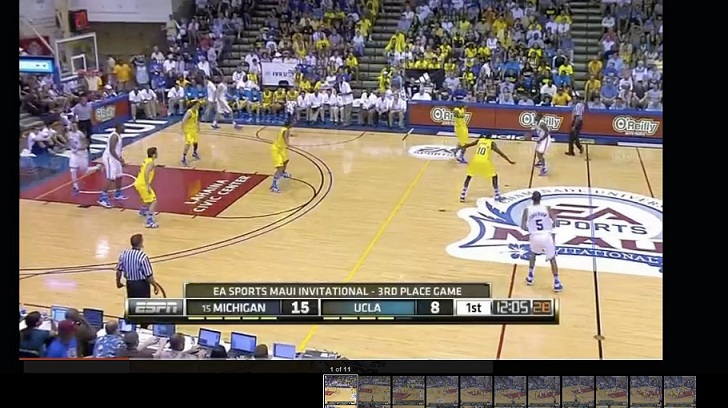 They don't have quite the same quality as Mr. Norlander's, but for those that got through that intro are probably digging the Flash photo album Rob has embedded.

Click on a thumbnail image in the post, and you're brought here. Basically, you can see the play progress in visual fashion, and click back to continue reading Rob's dissertation. 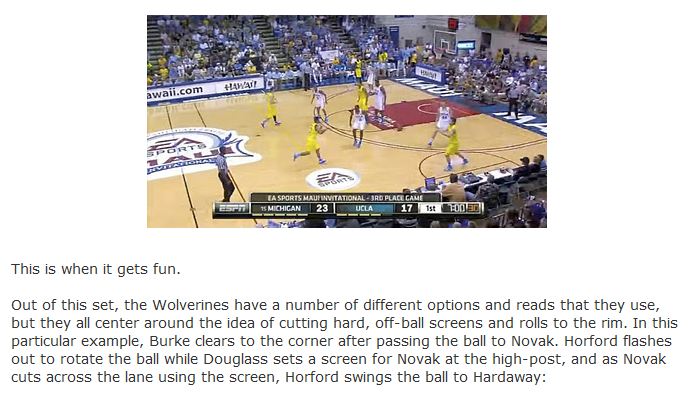 After 17,000 words and 59 screengrabs, apparently we were being duped to thinking that it was a good time. But it's at this moment, eons away from the lede, that we can cut loose. At this point, the topic has shifted to a Wolverines offensive set.

I took a screengrab of all of Rob's screengrabs, cropped, zoomed out, cropped again, zoomed out even more, and I still think this image measures out to a country mile if you were to print it.

Rob certainly knows his stuff, he played ball in college, so there's plenty of knowledge to be gleaned here...if you have an abnormally long lunchbreak.

One of SFBE's own got in bed with the TrueHoop network a few months ago, and he's pumping out great stuff that true hoopheads will love. Sure I doubt he came up with this 1-on-1 idea himself (Dave Ryan needs constant hand-holding), but I hope to see more of it as the season moves along.

Despite my endorsement, this piece needs some sprucing. 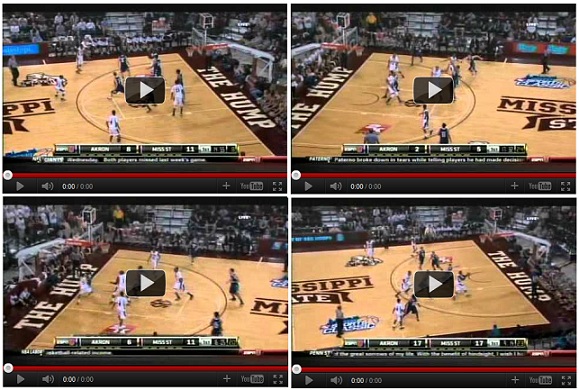 If Dave Ryan were a server at TGI Friday's, he would be issued a stern warning by his shift manager for not having enough flair. Seriously, dude, what is this? Four videos, zero screen grabs, zero opportunity to screw around with MS Paint? Just four quick clips of two big guys banging bodies on a not so flashy looking basketball court.

Yea, sure, tucked away under those videos is excellent, original insight on Mississippi State's Renardo Sidney and Akron's Zeke Marshall that I would struggle to come up with myself, but they're not exactly marquee names. I'd love some sort of gimmick as part of your next attempt.

There's no doubt that these types of posts are tedious and time consuming. You actually have to step away from your Twitter feed for 40 minutes and pay attention, maybe even DVR the game for a re-watch to get a true handle on whatever you're going to write about.

Keep up the good work, gentlemen! I'll continue picking the low-hanging fruit while you burn the midnight oil.