Share All sharing options for: We found Hollis Thompson's doppelganger 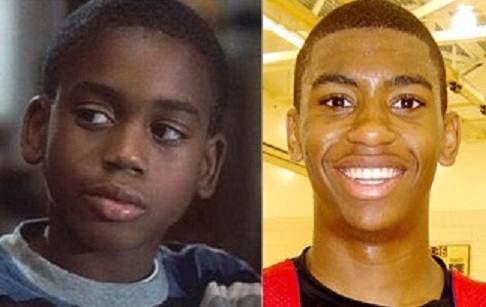 For about the last year, at least for as long as Georgetown Hollis Thompson mattered, we knew he looked like someone. He looked a lot like a person who was/used to be relevant. Perhaps he was that person, or perhaps it was just a striking coincidence.

Finally, after restless nights and IMDB scouring, the answer was shoved right in my face.

Currently, I'm in St. Lucia on a Christmas vacation with the fam.

Anyway, we're given an odd collection of TV stations to choose from, among them a movie channel that still shows Space Jam. Yes, that legendary film that actually can withstand the test of time; it remains quite enjoyable.

Just look at the similarities!

This kid has been eluding me for months now. I knew Hollis Thompson either was a child actor or had a doppelganger who was in movies. Could not confirm either, but was eager to solve this mystery. In addition, the grown up version of Brandon Hammond still looks a lot like Hollis Thompson.

I understand this article really has nothing to do with anything, but had to pump it out there for others who may be thinking the same thing.

The resemblance is striking. Perhaps a member of Hollis Thompson's family can shoot me one of his baby photos to see.