The Morning After Recap: Friday, December 30

Share All sharing options for: The Morning After Recap: Friday, December 30

It almost looked like a misprint watching the update scroll across the bottom line. And yet, there it came a second time. And again. Vanderbilt 35, Marquette 8. What?!?! The 14th-ranked team in America, getting whitewashed by the biggest underachievers in college hoops? Can't say anybody saw this coming.

Even though the Golden Eagles would eventually score a few more points and cut the lead as the game wore on, the damage from Vandy's opening onslaught was far too significant. The final line equated to a 17-point loss, but almost felt like a win in its own right for Buzz Williams' squad considering the odd circumstances. For as often as we hear that games aren't ever decided in the first few minutes, this one absolutely was.

Rarest of all is the fact that that these two programs were quite comparable on paper entering the game. Knowing Vanderbilt's hot and cold tendencies, it's often hard to envision the Commodores ever really blowing another power conference school out of the water. But clinging to a double-digit lead and rolling up a near-30-point advantage are not two in the same.

We've seen how mental focus can sometimes disappear around the holidays, and that's obviously what happened here. One team was ready to play, and the other wasn't. There's no other way to slice it, this was a legitimate 'statement win' for a Vanderbilt program that needed a strong push in the right direction.

* Rosario'd: Rutgers shocked No. 10 Florida in double OT. The most thrilling game of the day, without question. (On the Banks)
* Starting to see a bit more of that Vanderbilt team everyone was so high on entering the season (Anchor of Gold)
* A completely unexpected Pac-12 debut for Dana Altman's Oregon Ducks (Addicted to Quack)

Harvard - Up by seven at the break over a pesky Boston College team, the Crimson delivered a masterful defensive performance in the second half, yielding just 13 total points. Boston College led fors and even held a commanding 14-3 advantage before Tommy Amaker's Ivy juggernaut snatched the momentum away. Harvard is now 11-1, and won't have to deal with another power-six school again this season.

Georgia Tech - What's the deal with Thursdays? After suffering a brutal six-point loss to Fordham last night, first year Tech coach Brian Gregory is now 0-3 when playing on a Thursday. This wouldn't be nearly as bad if Tech's losses, a hat trick of failure against St. Joe's, Mercer & Fordham, came instead against power conference schools. These were supposed to be lay-up games for a team in need of as many early-season confidence boosts as possible. Tech's big boy schedule starts now, and this team doesn't appear ready for it.

Matthew Dellavedova-St. Mary's/Eli Carter-Rutgers - For the first time ever we have co-MVP's from the previous night. The always-enjoyable Dellevadova epitomized efficiency in a monster win over BYU, finishing with 18 points, 12 rebounds, six assists, four steals and just one turnover. Carter, on the other hand, was the integral force in Rutgers' shocking double overtime win over No. 10 Florida. The true freshman recorded a career-high 31 points to go along with his seven assists and seven rebounds to lead the Scarlet Knights to their biggest victory of 2011-12. 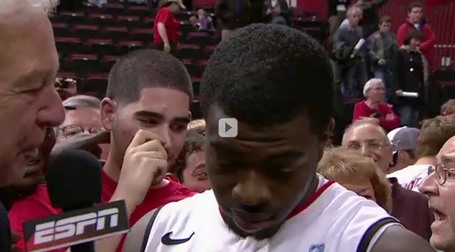 Standard protocol: When hovering over a post-game player interview like a clown, try not to pick your nose.