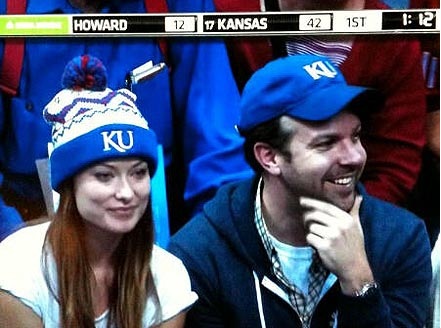 After all those gossip mags and tabloid newspapers published rumors for weeks that the two had been dating, actress Olivia Wilde and Saturday Night Live favorite Jason Sudeikis either thought nobody would notice them in rural Lawrence, Kansas, or that Phog Allen Fieldhouse was the perfect setting to publicly out themselves as a couple.

The two took in last night's Kansas - Howard game (a blow-out) and were shown on the jumbotron to a thunderous applause. Following the game, head coach Bill Self was asked about the pair, revealing he's a huge fan of Wilde's show House and was ticked he didn't get to say hi to them.

Sudeikis, who grew up in Overland Park, Kansas and played high school basketball, is a huge Jayhawks fan. He's a knowledgeable sports guy and has been spotted at Madison Square Garden during a number of college basketball game over the past few years. Additionally, he's appeared in many sports-related SNL skits, most recently that one about Tim Tebow, and has attended a few recent ESPY awards.

He's a good dude, so let's give him a golf clap for showing off his new lady far away from the world of paparazzi and instead in one of college basketball's most historic venues.