The Morning After Recap: Tuesday, December 6

Share All sharing options for: The Morning After Recap: Tuesday, December 6

Monday offered college basketball fans a relaxed, toned-down slate of games. Oddly enough, this happened on a night where the most passionate, over-the-top analyst was honored at Detroit's Calihan Hall by a slew of former players and coaches. It was all too fitting.

Dick Vitale, the legendary coach-turned-broadcaster spent only four seasons with the Titans from 1973 to 1977, but his imprint on the program is still visible today. The decision to re-name Detroit's floor Dick Vitale Court was a perfectly-orchestrated tribute to a man who has held the torch for college hoops for decades.

All in all, the evening went off without a hitch. Even as the game itself felt a bit secondary, the Titans still pulled out an important win in front of a hoops icon and handed him the most memorable tribute imaginable. The fact that no other big games were scheduled also helped to make this feel even more special, as it confirmed that Vitale's cool moment wouldn't be lost in an endless cycle of dunk highlights. Fun night.

* DePaul's Oliver Purnell on Milwaukee loss: "This is a team that will win a lot of games. I thought they beat us in every phase. I thought they out-coached us." (Milwaukee Journal Sentinel)
* Don't try this at home: Fordham forgets to score in the final 2:48 and still wins by one (The Ram)

* Another stumble for the Johnnies. Or, as interim coach Mike Dunlap likes to put it, "the education continues." (Rumble In The Garden)
* A North Carolina fan travels to Lexington for one of best diaries you'll read this season (HoopSpeak U)

Detroit - It was a magical night with ESPN cameras in the house, and the Titans threw down arguably their most impressive performance of the year. Head coach Ray McCallum Sr. was desperately in search of a momentum builder. Looks like he just found one.

Arkansas State - The options here were slim, but the Red Wolves get the nod after allowing Austin Peay to pick up its first win of the season. The Governors entered the night at 0-9, making just 39.5% FGs as a team, and yet still found the win column after taking down ASU in overtime.

Vincent Council-Providence - The 6'2" guard from Brooklyn finished a rebound shy of his first career triple double in a win over Brown (21 pts, 11 asts, 9 rebs). Council also posted a 19-11-7 game against Holy Cross back in November, and is on pace to draw some looks for 2nd Team All-Big East.

65 - Combined free throws attempted by Yale and Sacred Heart. Rather miraculously, with a whopping 49 fouls called between the two teams, only one player managed to foul out. 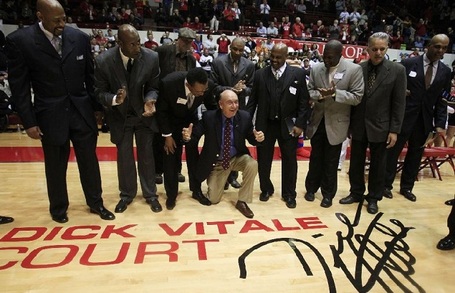