The Morning After Recap: Thursday, December 8

Share All sharing options for: The Morning After Recap: Thursday, December 8

Right when it seems like things can't get any worse for first-year Utah coach Larry Krystkowiak, they do anyway. The Utes entered yesterday's game with Cal-State Fullerton sporting a 1-6 record, with the lone win coming against a no-name San Diego Christian program. And while there probably is a light at the end of this dark and dreary tunnel, unfortunately nobody can see it.

So with Utah's leading-scorer Josh Watkins suspended, the Utes continued their embarrassing trend on Wednesday by letting Fullerton cruise to a 31-point win. It a word, it was disgusting. This is supposed to be a Pac-12 team we're talking about. You know, a team that hails from one of the sport's six power conferences. With the way things are going, the mere fact that Utah calls the Pac-12 home should almost disqualify the league from being viewed with a "power" label for the foreseeable future.

Now that we've seen what this team is made of (mostly Jell-O), nobody is expecting Krystkowiak to right the ship and compete for a postseason bid. But being mentioned with a group of the worst BCS-level teams and actually being the worst power conference program by a huge margin are two vastly different distinctions. And right now, the Utes are clearly flirting with the latter.

Nevada - Trailing by two at the half against Arizona State, Nevada used a flurry of offense from its star player, Deonte Burton, to take hold of the game. The 6'1" sophomore poured in 21 of his 28 points after the break, including nine made free throws, to give the Wolf Pack its first road win of the season.

Alabama - Back-to-back losses for Anthony Grant's high-flying team are not going to be easy to swallow. The latest, a 12-point defeat to Dayton, was especially frustrating. The Tide basically fell apart near the end of the first half and entering the locker room down by 11, but never were able to cut the lead below four points in final 20 minutes. The sole mini-comeback that Alabama did have was promptly extinguished by consecutive threes on Dayton's end.

Patric Young-Florida - Mr. Physique Bias was integral in a win over Arizona, totaling 25 points, ten rebounds and a pair of blocked shots. While his teammates were assassinating possessions with rushed shots, Young was the guy on the inside cleaning everything up. His point total would have been closer to 30 if he had any measure of touch from the free throw line, but it's clear Florida's athletic monster is only scratching at his potential. Nights like this certainly have NBA scouts buzzing.

16.67% - Combined field goal percentage of San Jose State's guards in a destruction by Cal. Of the seven players included (6 for 36 FGs), not a single one made more than 33.33% of his shots. Now is probably a fair time to reveal that SJSU scored exactly 36 points as a team. Makes sense. 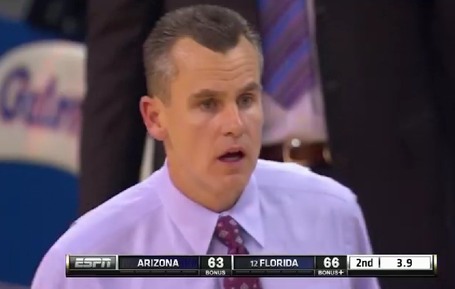