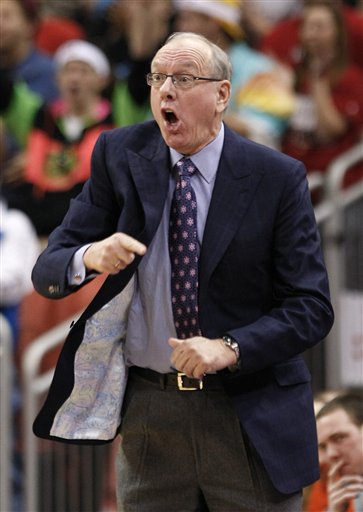 Year in and year out, the Syracuse Orange are one of the most talked about teams in the nation. Whether it's a stud freshman, a trio of overhyped freshman, a delinquent shooting guard, a magnetic point guard, a mouthy, ornery coaching legend, an NCAA tournament snubbing, or a Final Four contender, the Orange are a trending topic at least three, but often times four times a season.

At the start of the college basketball season, we were treated to a whiny post-game diatribe courtesy of Coach Jim Boeheim talking about how "over-rated" his team was and how the players they were supposed to be leaning on couldn't make a shot. While all those things were true at the time in November, the Orange record remained unblemished, and stayed that way until January 15th.

What appeared at the time to be an impressive 18-0 start to the season and the rise of yet another Syracuse team to elite heights can now be accurately described as a facade, and it's not all their own fault.

A Thanksgiving weekend sweep of Michigan FROM THE MIGHTY BIG TEN, and Georgia Tech A HISTORICALLY SOLID PROGRAM was followed up by a shellacking of Cornell, last year's IVY LEAGUE CHAMPIONS, and NC State which BORDERS DUKE AND CAROLINA. The trickery came to a crescendo on December 7 in Madison Square Garden when the Orange toppled the EIGHTH RANKED TEAM IN THE NATION, Michigan State. What a great win, right? err...

If you're counting, that's zero quality wins so far on the season for Syracuse.

Shockingly, the Orange managed to beat then #15 Notre Dame on New Year's Day, and followed it up with a win at St. John's. Two impressive wins, considering how well Notre Dame is playing now, and how tough it is to come by wins over the Johnnies at the Garden. It was not long after, though, that the true colors of the Orange began shining through, much like the sun does on a warm winter day in Syracuse, NY.

From January 17 to February 12, Syracuse lost six of eight games. They can thank an ice cold Kemba Walker for facilitating their third and final quality win to date as they upended Connecticut in Storrs on February 2.

Syracuse showed us several things during that stretch of futility.

At 20-6 and with a DePaul game left, Syracuse will almost certainly make the NCAA tournament field of 68. That record may even resonate as being one of the best in the country, because it is. But look closer and you'll see that really only 3 of those 20 wins are quality. Don't be fooled, this team is no better than the 9th place they hold in the Big East standings. Glaring weaknesses abound, and unless they have a Georgetown-like turn around to their season, they'll be a one-and-done come March. And that scenario may not be so bad, if it looks anything like this did.