Last week we created a simple formula to determine the top overall teams in college hoops. We took a total of five key ingredients, averaged them out, and the results were quite interesting. But that doesn't mean everything was perfect with our trial run. For starters, last week's numbers were slanted heavily in favor of Ken Pomeroy's rankings (not necessarily a bad thing), as offensive and defensive efficiency each received their own category. This led to a bit of confusion for teams like Texas (elite on D, not so much on O) and Wisconsin (the opposite) since Pomeroy's overall rankings have already taken each end of the floor into account. So yeah, back to the drawing board...

This time we're simply going to average a team's offensive and defensive efficiency rankings to come up with one number instead of two. Easy enough, right? 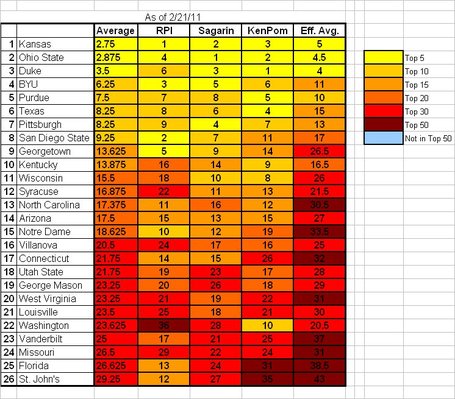 Note: Even though the efficiency category is an average rather than a single numerical ranking, the color coding will remain the same to avoid confusion. Deal with it.

Next week I'm going to take this exact same formula and apply it to every single team on the NCAA Tournament bubble. Should be fun.