Assigned Reading: Waiting for the day readers march in and demand an end to the dreck

Share All sharing options for: Assigned Reading: Waiting for the day readers march in and demand an end to the dreck 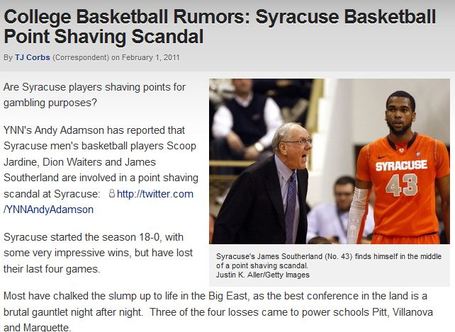 The Unfounded Rumor That Swirled Around the Web of the Week was an explanation as to why the Syracuse Orange had fallen into a four game losing streak. It was not because two of those opponents were ranked in the top 10, or that their opponents shot a combined 33-69 from behind the three-point line during that four game span, or even because this Orange team might have been overachieving to begin the season 18-0.

No, the reason was a point shaving scandal, according to WYNN’s Andy Adamson who posted the rumor on PokerFives.com.

And because they're Google News keyword hounds and focus on mounds of traffic rather then serving as a network of solid writing by passionate fans and aspiring sports writers, BleacherReport.com jumped on it, hungry to be out in front of the story. Correspondent TJ Corbs, who has "been watching sports in the Northeast Corridor and reading interweb newsgroups for many years" and has an avatar of a pig wearing cow slippers, really brought the rumor to light, and now he looks downright silly. Because the rumor never had legs, Corbs' story has been removed by BleacherReport. Luckily, the the cached version still has the original article and should be available for at least a few days.

Naturally, this form of reporting was quite unsettling to a number of venerable sports writers, including Dave Kindred. Kindred, a former columnist for The Sporting News and commentary contributor to Indiana University's National Sports Journalism Center, took the sports blogging and new media world to task, essentailly asking when all this crappy content would dissipate to allow the cream to rise:

This dreck makes me happy because, some wonderful day, readers will notice. They will notice what's terrible and what's terrific, yes, by damn, they will. The more of the terrible they see, the sooner they'll look for the terrific. And on some handsome day in the Digital Age, they'll march into the town square demanding the terrific.

Apologizes for being biased, but I think the movement of fans understanding certain bloggers can actually be considered as a reliable source of sports news and commentary, and developing that sixth sense of what is shit, is well underway. Sure BleacherReport gets criticized for much of its content, but there's plenty of other similar networks (SB Nation included, obvi!) which are well respected, generate positive sentiments by venture capitalists, and are doing it the right way. Eventually all this will sort itself out, and Kindred - an "old-line, ink-stained" scribe - seems to welcome that day in his piece.