Review of ESPN's 'Fab Five' documentary: 4 out of 5 stars

Share All sharing options for: Review of ESPN's 'Fab Five' documentary: 4 out of 5 stars 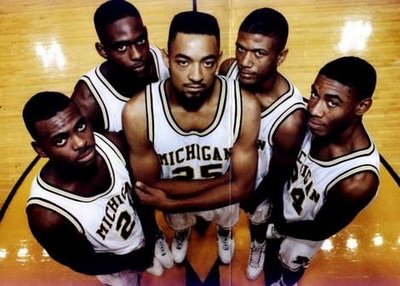 After nearly a month of sneak-previews and promos, ESPN unveiled its two-hour Michigan Fab Five documentary on Sunday. And as a lifelong fan and proud resident of the state, I can honestly say this was a well-thought out, engaging look at one of the most influential teams in college basketball history. When it comes to offering up a go-to history lesson for youngsters, this piece was a resounding success. But hiding behind a few surprise quotes (half of which were released before the airing), at its core, this broadcast felt incomplete. The material on its own, was brilliant. The delivery, for a variety of reasons, just couldn't match the overwhelming hype.

Above all else, Chris Webber's presence, or lack thereof, cannot be overstated. This was the Fab Five, after all. Every one of the key components back then, from the coaches to the role players, came aboard for interviews. Webber's shocking denial sealed the fate of this documentary from the onset, and never gave this project a chance to flirt with excellence like it deserved to. In terms of sheer popularity, Webber has been, and will always be the unquestioned king of this bunch.

In a way, director Jason Hehir was handicapped from the jump with an incomplete cast at his disposal. Doubling up on the quotes from Jalen Rose was perfectly fine because he's a well-spoken, interesting individual, but let's be real here: This felt like the equivalent of interviewing the '96 Chicago Bulls sans Michael Jordan, with the idea that asking Scottie Pippen most of the questions would supply the crutch of the quotes.

I'm a huge fan of the 30 for 30 series, and secretly hoped this particular topic would end up under the ESPN microscope. I had no problems eating up every minute of this nostalgic trip back to my childhood, but for a two-hour show lacking the biggest star it tries to promote, I could help but feel like many topics were glossed over. Michigan fans should probably go ahead and purchase this DVD as soon as it's available. However, as far as casual observers go this didn't quite reel in the viewers like it could have.