Pittsburgh Got the Best Draw: Southeast Region is Weakest of Four in the Bracket

Share All sharing options for: Pittsburgh Got the Best Draw: Southeast Region is Weakest of Four in the Bracket 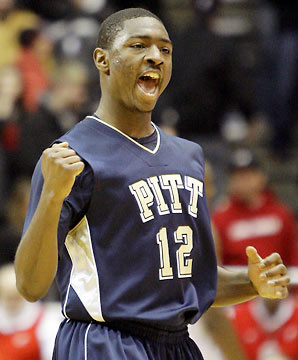 Week 1 of sloth is over, and with the field of 68 throwing two games at us on Tuesday/Wednesday for the first time ever, Week 2 is just a chip shot away. Time to dig into the bracket...

The pattern of thinking is predictable every year after the hugely anticipated Selection Sunday Show! The who got number one seeds question is like wondering where LeBron was going this summer after hearing Chris Broussard report Miami all day. That is quickly followed by the surprise of which bubble teams didn't get in to the tournament, and on that question's heels is the immediate outrage of which bubble teams got screwed by the committee. After cooling down, we realize it's time to get hyped and the picking of our most intriguing first round games takes place. It all comes full circle when Greg Gumbell goes off the air and we actually have a chance to look at the field of 68 as a whole. It is then that we can determine that the number one seed with the easiest road to the Final Four in Houston... drum roll... is the Pittsburgh Panthers, from Pittsburgh, Pennsylvania.

Pittsburgh was the class of the Big East this year, which was once again the finest conference in the land. After starting the year 12-1 in non-conference play, the Panthers then charged through Big East play winning 15 games and the regular season title in the process. In a way, they deserve the easiest region.

Wisconsin- Despite a regular season that ended in getting absolutely run in Columbus at the hands of the Buckeyes, oh and failing to get out of the teens in either half of their lone Big Ten Tournament game, this Wisconsin team is daaaangerous. If they did have some inconsistencies this season, it wasn't because of poor play at the point. Rising lead guard, Jordan Taylor is the kind of floor leader every team needs to go on a tournament run. As usual on Bo Ryan teams with star point guards (Devin Harris, Trevon Hughes), they have a bevy of shooters. Five players surrounding Jordan all shoot the three between 30%-46%. If these guys can get it together and overcome perhaps the toughest 13-seed ever in Belmont (30-4), they've got the pieces to go on a tear.

Kansas State- We all recall hating on this team during their 2-5 stretch back in January. Frank Martin glared into the screen on CBS yesterday declaring how glad he was that none of those doubters played for him, and that he didn't work for him. That was terrifying enough for me. This team means business, and they know how its done in March. Jacob Pullen came alive with a scoring stretch of 38-27-27-24-20 just a month ago, and this kid is ready to lead the Wildcats once again. Curtis Kelly, Jamar Samuels, and Jordan Henriquez-Roberts form a big athletic front line capable of banging with Pittsburgh. Like all good teams, this bunch can win a physical game in the 50's and can also run in the 80's in a shoot out.

Florida- This team appears as talented as any in the field, but the two players that can lead them deep to the regional final, can also be the Gators demise in round 2. Trigger happy guards Erving Walker and Kenny Boynton both average around 14PPG, but they shoot a combined 39% from the field. Both guys are capable of big scoring nights, and if they can channel their inner 1987 Billy Donavan, Florida can go a long ways. These guards must get the ball to Alex Tyus and Vernon Macklin in spots they can attack from. Tyus, a senior, is averaging under 10PPG for the first time in three years, while Macklin just pops in for a hello for some games but owns the paint in others. Chandler Parsons is one of the most versatile and clutch players in the country, and the small forward is the glue for this team. After a first round exit at the hands of The Jimmer last year, the talented Gators will be hungry, but are they smart enough to get it done.

St. John's- One of this season's best stories has a real chance to get even better. Steve Lavin has returned honor to the Red Storm program and he's done it largely with a bunch of seniors he never recruited. As if St. John's needed any more motivation, one of their own, senior and third leading scorer D.J. Kennedy went down with a season-ending knee injury just days ago. Dwight Hardy has been the leader for this team all year long. The Bronx native leads a fast, suffocating defense and when this team starts turning defense into offense, it's nearly impossible to stay with them just ask Duke. Oh, one other reason this team can challenge for the Southeast region... St. John's is the only team in the region to have beaten the Panthers already this season, in Pitt.

The weird part about those four 'contenders' I just listed, is that I secretly believe any one of those teams could fall in the first round. An experienced team of winners like Belmont could take down a sluggish Badger team. Utah State can run with anyone in the nation, and they too have a slew of seniors ready to take down K-State. UCSB, the 15-seed boasts one of the top scorers in the region at 6'5'' wing Orlando Johnson. He was a Mid-Major to look out for early in the season and he didn't disappoint averaging 21PPG this year. Lastly, if Mark Few can rekindle the magic, Gonzaga is deep and has a front line that is bigger and just as athletic as St. John's. It is a shame BYU will be without Brandon Davies. No matter how you spin it, their supporting cast around Jimmer looks awful against great defensive teams who can load up on him, and have no fear of Davies in the middle.

Anything is possible in this region among seeds 2-15...I tried to make those challengers sound as threatening as possible, but at the end of the day, Pittsburgh is far and away the best team in the region.

Ever wish that more things worked like college brackets? That you could seed everything that way? Top 64 pre-game foods. Top 64 college players. Well, now you can do just that with your friends, with the Allstate BFF Brackets, which takes your 64 top Facebook friends (an algorithm seeds them based on interaction) and seeds them in four regions, exactly like the real tourney. Once the tourney starts, your friends advance with the corresponding seeds – till one is left standing. Check it out at http://apps.facebook.com/bffbrackets/