Share All sharing options for: Searching For: Matt Santangelo 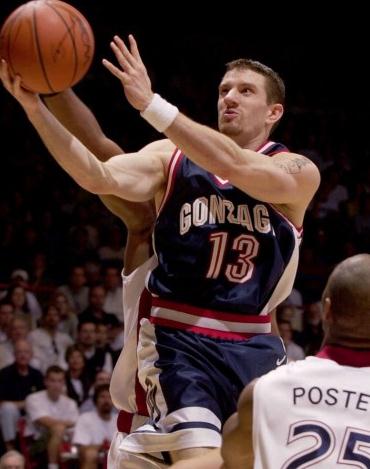 When 18-year old Matt Santangelo chose Gonzaga over Stanford, Oregon, Northwestern, and Rice, he knew they had a a great chance to be winners and that he would be on the floor right away. He never could have imagined, though, that he would be the centerpiece of a watershed moment in the history of Gonzaga basketball-- March Madness, 1999.

Gonzaga entered the tournament the #10 seed and faced Minnesota in the first round. Strangely enough, the game was in Seattle, Washington, just hours from Spokane. Santangelo ran the point on the roster that included the likes of (nostalgia time) Richie Frahm, Jeremy Eaton, and Casey Calvary. The Zags shot Minnesota out of the gym and Santangelo netted 14 points and 8 assists. Once again, Gonzaga had home court advantage when they faced 2nd seeded Stanford. Matt Santangelo led the Bulldogs with 22 points, 6 rebounds, and 6 assists on their way to a monster upset. Cinderella made it to the dance, the slipper fit Santangelo and the Zags. The dream run would continue...

In the Sweet 16, Gonzaga hit 12 three-pointers and eeked out a 75-74 win over Florida, and Santangelo added 11 points and 7 assists. The nation was fully on the Bulldogs bandwagon when they took on top seeded Connecticut, the eventual National Champion. After taking a lead to halftime, UConn took off down the stretch, limiting the Bulldogs point guard to just two points on their way to a 67-62 win.

Gonzaga would make another run the following year beating Louisville and St. John's with the senior Santangelo leading the way again. He scored 16 and 21 in the first two games. Recently, Matt spent time with the NY Post sharing the experience of beating #2 St. John's in the 2000 NCAA Tourney.

The NCAA Tournament runs that Santangelo led forever changed Gonzaga, both the culture of the program and the country's perception of them. Winning the WCC became the norm, but not the end-all goal for the Bulldogs. Coach Mark Few had them believing every year they could make the Final Four. Since 1999, top seeds who see the name Gonzaga in their region know its a team they'd loathe to face. While it remains a mid-major, Gonzaga's brand is nationwide. They have the ability to schedule home-and-homes against programs like UConn, Memphis, and Wake Forest, and non-conference tilts against Duke and Michigan State. Coach Few has grabbed prize recruits from Chicago, Texas, Canada, and Brazil and competes with the Pac-10 for the blue chippers on the left coast.

Much of this steady rise can be attributed to the leadership and clutch play of Matt Santangelo twelve March's ago. His playing career wasn't over after the 2000 as Matt ventured to Italy where he played for the better part of a decade before returning to Spokane. Today, you can find Matt working in Business Development for Summit Capital Group LLC in Spokane, or you can hear him calling Gonzaga basketball games, something he began at the start of this season.

As the Bulldogs prepare for their opener with St. John's, Mark Few can only dream that his pioneering point guard could switch the suit for the jersey for another run. With a limited at the guard position, the 11th seeded Zags are back to being doubted, just like they were in 1999. Only this time, expectations have been set higher, courtesy of Matt Santangelo and the '99 Zags.