Share All sharing options for: NCAA Tournament Coverage: Day One in Review

The greatest postseason in sports is finally upon us, and Thursday's 16-game slate wasted little time getting things kicked off on a high note. Packed with game-winning jumpers, player of the year-caliber performances and a pair of unmistakable Cinderellas, the opening day of the 2011 NCAA tournament translated into a 12-hour block of visual euphoria. And because of the new TV format, every single game had its own showcase. What more could a greedy college basketball fan ask for?

Butler 60, Old Dominion 58
A well-played defensive battle between two likable, but pesky mid-majors. Neither school led by more than six all game, and it seemed very feasible throughout that this one would come down to a last-second shot. Tied at 58 with the game in its hands, Butler relied on, of all things, Matt Howard's hustle to reach the field of 32. The only true buzzer-beater on opening day, take a look at where Howard is standing with just 2.7 seconds left in the picture below. Now THAT's hustle. 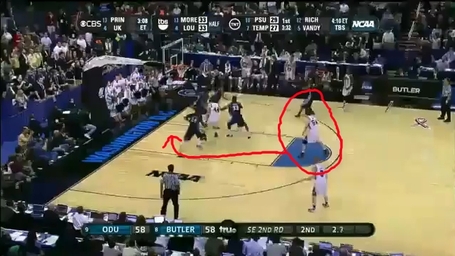 Morehead State 62, Louisville 61
More effective than a bottle of Windex, big man Kenneth Faried hauled in 17 rebounds with a Dennis Rodman-like ferocity. Rick Pitino's over-matched frontline never really stood a chance on the inside, and an unfortunate injury to senior guard Preston Knowles left the Cards without their most important player on the perimeter. Still, Louisville clung to a two point lead until the sequence below took place. Madness at its finest, folks...

Temple 66, Penn State 64
In the waning seconds of a predictably grueling possession war, Temple point guard Juan Fernandez raced down the court and stopped his dribble with only 3.8 ticks on the clock. Penn State, desperate to avoid a foul at all costs, is in perfect defensive position to deny a shot attempt or backdoor cut. So what does Fernandez do as a remedy? He pump fakes (thank you very much, Mr. Bob Knight), pivots to his right, and then cuts immediately back left in time to hurl a shot at the rim. The time-tested up-and-under move! And BOOM! It tickled the twine with 0.4 seconds left to halt Fran Dunphy's 11-game NCAA losing streak. 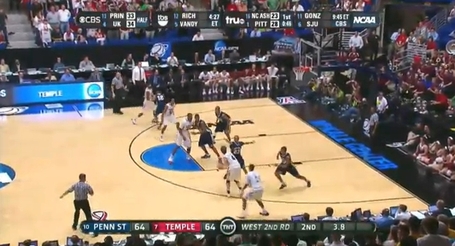 Kentucky 59, Princeton 57
A regular season that saw plenty of close games likely helped Kentucky fans cope with situations much like the one they faced against Princeton on Thursday. No matter how easy the 4-seeded Wildcats scored, the brainiacs at the other end never allowed things to get out of reach. Neither school set the nets on fire, but with his season on the line, John Calipari put the ball in the hands of a true freshman who had just bricked seven consecutive shots. The rest, as they say, is history...