Oakland not sharp enough on D, edged by Texas

Share All sharing options for: Oakland not sharp enough on D, edged by Texas

We heard all about Oakland's prolific scoring ability, but how would it look on defense against one of America's elite programs? After 40 minutes of exciting basketball, the team that Seth Davis dubbed his "upset special" just couldn't take down the fourth-seeded Longhorns in the final minutes. Greg Kampe's Golden Grizzlies clawed back valiantly after falling down by as many as 15 points late. And despite the loss, Oakland's 81 points represented the third highest total that Texas has yielded this season.

Texas freshman Tristan Thompson stole the show for his defensive work on Keith Benson (6 for 15 shooting). But it was his aggressiveness in transition that caught our eye, as evidenced by this breakdown from today's game:

Thompson heads out on the break after an Oakland miss. Like a tailback with 50 yards of daylight in front of him, the big freshman hits the turbo button when he sees dozens of feet of open court. 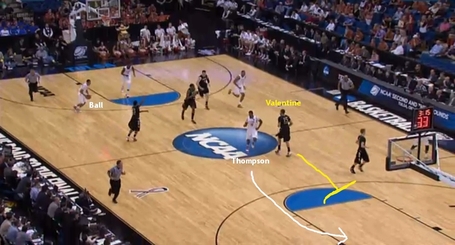 Oakland's Drew Valentine is the only player in position to check an uncontested trip to the basket. With his teammate Keith Benson huffing and puffing to catch up to the play, Valentine's only logical move here was to backpeddle near the foul line to cut down the passing lane.

Instead of adjusting, Valentine stops and takes himself out of the play to put pressure on the ball. In the process he allows Thompson, the only Texas player in a moderately-threatening spot on the floor, to slide behind him for ideal position.

By the time Benson managed to get inside the arc, the ball was already in the air with Thompson assured of a wide open dunk attempt.

A defensive-oriented Texas squad came out and beat Oakland at its own game on Friday afternoon, and situations like the one above are exactly how they managed to pull it off. Even though Valentine's head-scratching defense technically made this happen, Thompson's willingness to get out and run is a massive asset for the Longhorns going further.