Here We Go: A Different Look At Bubble Contenders

Share All sharing options for: Here We Go: A Different Look At Bubble Contenders

The third installment of our rankings mashup, as promised, focuses exclusively on schools that are hovering close to the bubble at this hectic time of year. To get our pool of teams, I eliminated everybody currently ranked in the top 30 in RPI because, and let's be real here, every last one of those schools is basically a lock for the tournament. Everyone else, however, was fair game. And while this tactic saw a few teams slip through the cracks who might not actually be on the bubble (Villanova and Cincinnati, for starters), it still offers a fair representation of just how good some of these tourney contenders really are, and that's ultimately what we're looking for here. 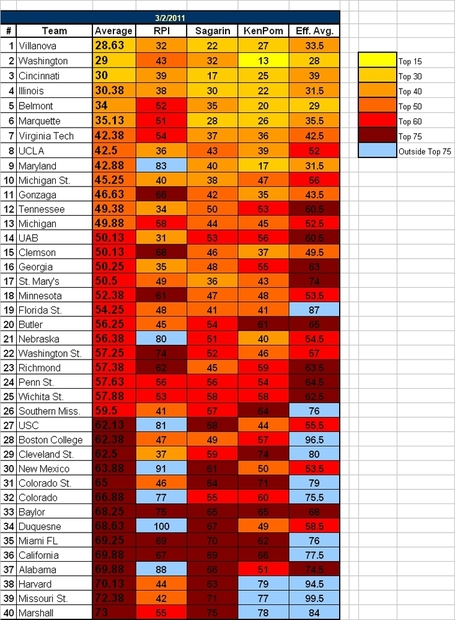 Observations after the jump...

PLAY THE MARCH TO THE CHAMPIONSHIP GAME AND YOU COULD WIN A TRIP FOR TWO TO LAS VEGAS! LOOK FOR THE CODE INSIDE SPECIALLY-MARKED PACKAGES 12-PACKS OF BUD LIGHT ENTER CODE AT FACEBOOK.COM/BUDLIGHT

No Purchase Necessary. Open to U.S. residents (except CA & TX) 21+. For a chance to win a Grand or First Prize, Game Period 1 begins 3PM CST on 2/14 & ends 3PM CDT on 3/18. For a chance to win a First Prize only, Game Period 2 begins 3:00:01PM CDT on 3/18 & ends 3PM CDT on 4/30. To participate, obtain a Code from inside specially-marked packages of Bud Light beer or to request a Code without purchase, visit budlight.com/freecode during a Game Period. Limit one (1) free Code request/day/person or email address. To play, text HOOPS to BEERS (23377) & follow prompts or visit budlight.com/freecode & follow instructions. See Official Rules inside package or at budlight.com/freecode for complete details. Void in CA, TX & where prohibited. Enjoy Responsibly –  ©2011 Anheuser-Busch, Inc., Bud Light® Beer, St. Louis, MO