Match made in heaven: Gus Johnson to call Jimmer vs. Florida

Share All sharing options for: Match made in heaven: Gus Johnson to call Jimmer vs. Florida 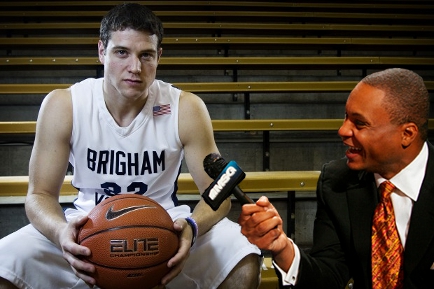 The two most polarizing figures on opposite ends of the announcing table, it was only a matter of time before CBS paired the unstoppable duo of Jimmer Fredette and Gus Johnson in the Sweet 16. Despite blundering the tournament's open weekend due to a greedy reliance on key timeslots, all the credit in the world goes to CBS for making this dream every bit a reality. At roughly 7:30 pm (ET) on Thursday, Jimmer's BYU Cougars will face the No. 2 seeded Florida Gators for a shot at the Elite Eight, with the venerable Gus Johnson on the call.

Johnson's flair for the dramatic is undeniable. Because of this he's become somewhat of a go-to guy for CBS in March, and the network usually does its homework to make sure it ships him off to the proper location. Earlier in his career he had a style that overwhelmingly favored the underdog, and CBS made sure he was around for every feasible Cinderella-worthy game in the field.

Best of all, as the years have gone by it has started to feel like all the these miraculous finishes are actually following Gus around. Before it was more about CBS chasing the big-time upsets to make sure he was present. Now they can just plop him down anywhere in the bracket and the exciting finishes will come to him. Remarkable stuff.

In many ways, Fredette's place in the game mirrors Johnson's stature among his own peers. Big East supporters will defend Kemba Walker to the death, but nobody scores points like The Jimmer. Nobody. This is the 2010-11 National Player of the Year we're talking about: A college junior who captivated an entire campus, and then weeks later did the same thing to an entire nation. Fredette is the best player in college basketball just like Johnson is the best announcer. And even if you disagree with those respective distinctions, who really cares in the grand scheme of things? This is the pairing we've been craving, and now it's finally here.

Buckle up. 'The Jimmer' and 'The Gus' are coming to a television set near you. A match made in heaven indeed.