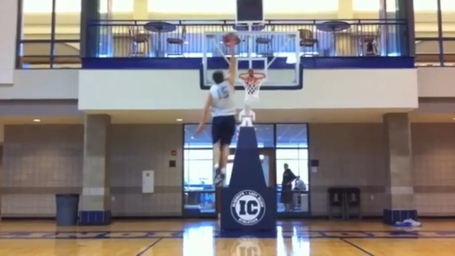 After being told he was a long-shot to receive an invitation to this year's NCAA dunk contest, Division III senior Jacob Tucker went to work with a video camera and his trusty 50 inch vertical. And on March 3rd he uploaded a two-minute clip to YouTube featuring some of the most absurd dunks imaginable for a 5'11" player. Three weeks later and Jacob's little video has roughly 2.5 million views. Not bad for some random kid who wasn't popular enough to be on the radar before.

You want a star? Thanks to the internet, Jacob Tucker just created one.

Not ones to miss out on this marketable opportunity, State Farm and Intersport (who runs the College Slam) took to social media to see if Jacob's case had any legs. They paired him with much-deserving forward Larriques "Rico" Cunningham from Lee University, in a Facebook-led vote-in for the final spot in the competition. Aside from the sad fate one guy has to lose and the remaining field hasn't been announced yet, this is a clever use of social media and could be a very welcome addition in future years.

Cunningham, who probably stands little chance after Tucker's effective use of a viral video, is a 6'7" wing in the mold of former dunk phenom James "Flight" White. The still photo of the in-game dunk/charge/Vince Carter-inspired leap below shows just how nasty this kid can be in the air. 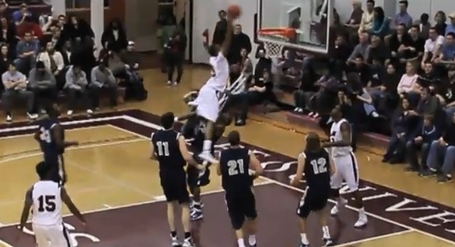 The winner of the vote won't be announced until March 29th, so you still have a full week to get those votes in.

Video evidence of both guys after the jump...