Did Brandon Davies get Jayci Stephen, and not his actual girlfriend, pregnant?

Share All sharing options for: Did Brandon Davies get Jayci Stephen, and not his actual girlfriend, pregnant? 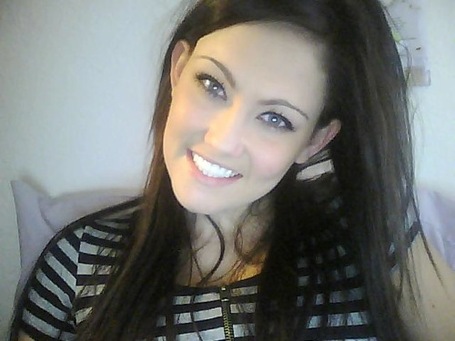 This is entirely according to FratHouseSports.com, citing a few sources that claim former BYU basketball player Brandon Davies did not get his Arizona State girlfriend, Danica Mendivil, pregnant, instead opting to put a bun in the oven of Jayci Stephen (above and also still findable on Facebook), of Utah Valley University.

The not at all ugly Stephen,19, has allegedly been "banished from the city of Provo," for having sex with Davies. The two had been seeing each other for a couple months, and this revelation is the latest in storyline that continues to grow in intrigue. Initially it was unknown what Davies had done to break BYU's honor code, then it was learned that it was because he had premarital sex, presumably with his girlfriend. But maybe not. Maybe he's got multiple conundrums to deal with here, and this story is about to get even more salacious. Regardless, it's great fodder for us bloggers, and I welcome any further developments.

Davies' - the Cougars third leading scorer - absence could significantly disrupt both the morale of his former squad and chances of them playing deep into the upcoming NCAA Tournament. Already the team is 0-1 without him, as they were beaten convincingly by New Mexico for the second time this season on Wednesday.