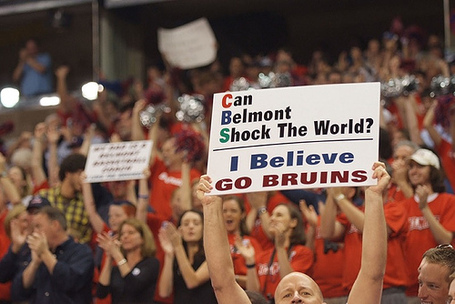 The first team to secure a spot in the field of 68, the Belmont Bruins captured the Atlantic Sun in convincing fashion last night, destroying Florida Atlantic.

If you haven't been paying attention, it would be wise of you to take a good hard look at this team. Currently leading the nation in wins, the Bruins breezed through the regular season with just one conference loss.

Participants in the tournament between 2006-2008, the Bruins are probably best remembered as that gritty #15 seed that nearly downed Duke. But these guys are much better this season, and have a legitimate opportunity to play a few games in mid-March.

A nice little breakdown of the Bruins is after the jump...

Projected seed: #12. And don't just write them off. This is the epitome of an upset team, and their balanced offensive attack means they can win without relying on just one player.