College Basketball Player of the Year Rankings: The Final Tally

Share All sharing options for: College Basketball Player of the Year Rankings: The Final Tally

It was fun while it lasted. Today marks the 14th straight week I've used this space to rank every notable name in the national player of the year debate. Going 20 players deep each time allowed me to give due to certain guys that might not have necessarily cracked the top ten in other ranking systems around the web, and it felt good to spread some of the wealth around (even if it was only for one week). That's not to say it was easy coming up with the 20 most deserving players based on snippets of the season, but hopefully you enjoyed this feature as much as I enjoyed bringing it to you. 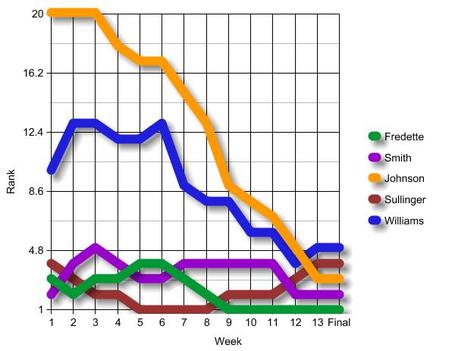 1. Jimmer Fredette-BYU
A SHOCKER! Held the No. 1 spot for five weeks; more than any other player. Led NCAA in scoring. It's Jimmer Time...

3. JaJuan Johnson-Purdue
Dominant in 2nd half of season. Brings his A-game against everybody. Deserves this spot for his game-changing ability at both ends.

4. Jared Sullinger-Ohio State
The top frosh, no doubt. He simply couldn't match the absurd numbers of his veteran peers. Just a flat-out bully in the paint though.

5. Derrick Williams-Arizona
On a different level than his opponents athletically. Endless versatility allowed him to wrap up the Pac-10 POY with ease. 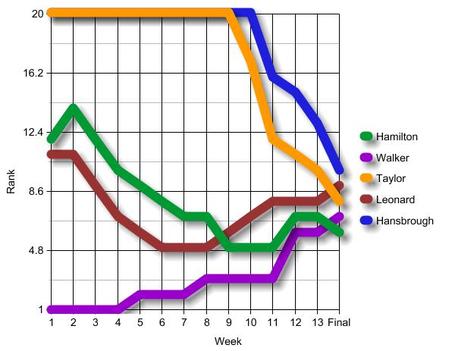 6. Jordan Hamilton
Played the role of go-to scorer and stout perimeter defender. Immense improvement from his freshman campaign. Struggled a bit with forcing shots down the stretch.

9. Kemba Walker-Connecticut
Blew everyone's minds with is quickness and big-shot ability, then flew back to Earth. Ultimately a tale of two seasons (elite vs. very good).

10. Ben Hansbrough-Notre Dame
Came out of nowhere to take the country by storm. For a three-point marksman, his 62.3% True Shooting% was outstanding. 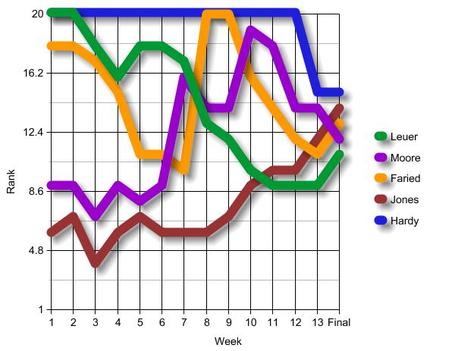 11. Jon Leuer-Wisconsin
Really starting to flourish in Bo Ryan's system. Took 32.4% of the shots for the most efficient offense in America.

13. Kenneth Faried-Morehead State
Only managed to record 27 double-doubles in 33 games. What a hack. And then he lucked out into breaking the rebounding record.His 2.4 blocks and 2 steals were quite awful too.

14. Terrence Jones-Kentucky
Made nights of 18 points and 8 rebounds seem easy. Still, he barely even scratched at his potential.

15. Dwight Hardy-St. John's
Another late bloomer, Hardy was especially clutch in the second half of the Big East season. Dropped 30+ on Duke, UCLA, UConn, and Villanova. 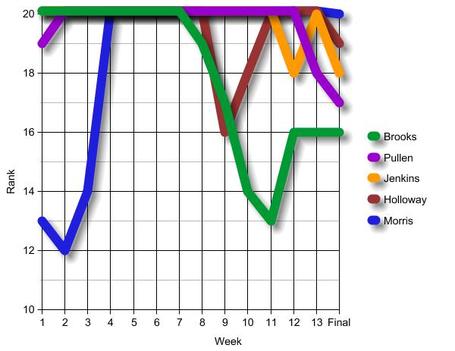 16. Marshon Brooks-Providence
How do you score 52 points and still let your team lose? Brooks took a boatload of shots, and scored a boatload of points this year for a moderate-to-bad Providence team.

17. Jacob Pullen-Kansas State
Crazy: Opened the season ranked No. 19 and ended two spots away. Really did a marvelous job turning his year around.

18. John Jenkins-Vanderbilt
A fair pick for SEC POY, but he's slightly one-dimensional. Spent most of the year on the proverbial bubble for top 20 status.

20. Marcus Morris-Kansas
A handful of talented contributors on the Jayhawks kept Morris out of these rankings. Love that he's third in the NCAA in 2PT FG% (65.4%)