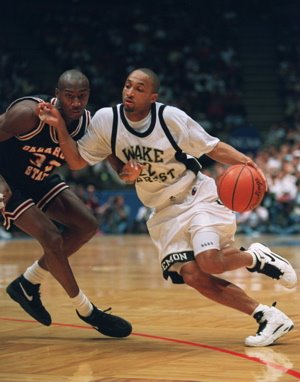 Tim Duncan, Chris Paul, and Josh Howard are undoubtedly the most famous Wake Forest hoopers in recent memory, but for three days in March of 1995, Randolph Childress was the baddest Demon Deacon of them all. An archived post from the now inactive blog davesez.com details Childress's dominating run through the ACC Tournament that year much more aptly than I ever could, being that I was just a youngster at the time.

So, Wake got Duke on Friday and Childress absolutely torched them, hitting 8 threes and scoring 40 points while also dishing out 7 assists. His 40 points tied for the fifth most in ACC tournament history.

On Saturday, Wake played and beat a talented Virginia team that would eventually end up one game away from the Final Four. Childress had his "worst" game of the tournament, hitting only 6 threes and scoring 30 points. Once again, he had 7 assists.

In the championship game, Wake faced a UNC team that featured Jerry Stackhouse, Rasheed Wallace, Donald Williams and Jeff McInnis and would eventually make the Final Four. Wake prevailed in overtime 82-80 behind Childress' 9 three pointers, 37 points and 7 assists. Childress scored all 9 of Wake's overtime points including the game-winning jumper with 7 seconds left.

It was a simply incredible three-game performance. Childress smashed the old scoring record by hitting for 107 points, an average of 35.7 points per game. He hit 23 three pointers in the three games, hitting 8, 6 and then 9. This entire season, only two ACC players had 8 three pointers in a single game. And on top of all that scoring, he dished out 19 assists. If you assume that those were all 2-point baskets, that means that Childress accounted for just under 50 points per game!

And he did all of that while playing with a broken finger.

That game-winning jumper capped off a storybook run that led to Wake Forest being named the top seed in the East Region. They would eventually fall to Bryant "Big Country" Reeves and the Oklahoma State Cowboys in the Sweet 16, but Randolph's spot in ACC lore had already been secured.

Childress averaged over 20 PPG in his senior year, was named the ACC Man of the Year, and years later was tabbed as a Top 50 player in ACC history. Clearly, his game was much more than three days in March, but that ACC Tournament is how his career is remembered. He was playing with a whole helluva lot of swagger and at such a high level that many believed he was primed for a long NBA career. They were wrong about that, but Childress's basketball career would continue on.

See what Randolph is up to now, after the jump...

Childress was picked 19th in the '95 NBA Draft by the Detroit Pistons. After a season with Detroit, and an injury-shortened season with the Portland Trail Blazers in which he clashed with P.J. Carlesimo (no, Latrell Sprewell wasn't alone) Randolph's NBA career was over. He enjoyed stints playing professionally in Turkey and Australia, before settling in the Italian leagues for the past decade.

There is currently a tea party movement to hire Childress as head coach at Wake Forest and return the program to glory. Whether he does or doesn't he treated us to one of the best tournament performances in College Basketball history. And for that we owe him a tip of the cap on Championship Week.