NCAA Selection Sunday: What You May Not Know About the Committee

Share All sharing options for: NCAA Selection Sunday: What You May Not Know About the Committee 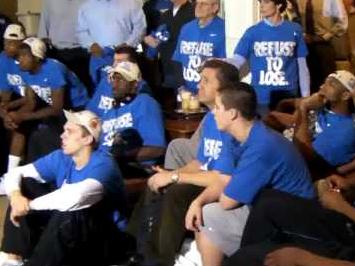 Easter Sunday. Bloody Sunday. Super Bowl Sunday....Selection Sunday. The first three represent monumental moments, grandiose events which have had sweeping effects on societies all over the world. Unlike those days, Selection Sunday is no remembrance of a religious figure, political conflict, or sports spectacle. It is simply...an announcement. Yet, for just over three weeks in March and the beginning of April, American sports fans become enraptured in NCAA Basketball hysteria in such a way that effectually lifts that fourth named day, Selection Sunday, to a level of importance which mirrors those historic days.

As everything in today's America becomes more visible and cameras receive access into forums previously off-limits, some talking heads have been calling for a live broadcast of the selection process inside the Indianapolis conference room. It's not going to happen this year, so there's no use belaboring that issue, but let's take a look at what will be happening inside the war room this week.

Between Smith and Hathaway's big name coaching suspensions, Wellman's forgettable basketball team, and Barnes's Utah State program that prefers at-large over automatic tournament bids, not to mention the scrutiny of the basketball world on them, this group has plenty of distractions to cope with.

As this Bay Area blog nicely depicts, the NCAA does it's very best to keep their ten members away from all distractions, a sort of group solitary confinement. Seriously, though...

"Wearing sweatsuits and loaded on caffeine, the committee will spend five days in lockdown mode on the north wing of the 15th floor of the Westin Hotel. A security officer will be stationed outside. An access code will be required to reach the committee by telephone. Not even the hotel staff will be allowed to enter without an NCAA escort."

The group apparently began their 'imprisonment' early this afternoon and set out to work on the field of 68. Like every year, this March's bracket holds plenty of uncertainties, some that the conference tournaments will help sort out, and others that will only get more confusing. No doubt, some of the questions the committee must ponder this year: Does Brandon Davies' suspension change BYU's seeding? Does the Big East get two number one seeds and the ACC get zero? How high do teams like St. John's, Villanova, and West Virginia go with double-digit losses? And then, they must filter through the usual bubble controversies.

This year, the committee must grapple with the new tournament field of 68, up from 65, (If you're unfamiliar with the new format, you can read about it here). The tournament begins on Tuesday, March 15th with two games featuring the last four at-large bids and two games featuring the lowest four automatic bids. The committee plans to schedule a bubble game and a play-in game on Tuesday, and likewise on Wednesday. Teams that we could see as the last four at-large include Colorado, Boston College, Michigan State, Georgia, Alabama, Missouri State, Baylor, Virginia Tech.

By the weekend, many of the unknowns will be sorted out and the committee will have most of the slots filled as they wait for the ACC, Big 12, and Big 10 championship games to conclude. How do they order the brackets and decide which teams go where? Well, some good citizen on Wikipedia, maybe Jimmy Wales himself, explained the S-curve the committee uses to determine seeding.

Though the brackets only feature the seed numbers 1-16 in each region, the committee assembles an S-curve of teams seeded from 1-64. In theory, the teams 1-4 on the seed list will all be #1 seeds (the #1 "seed line"), 5-8 will be #2 seeds (the #2 seed line), and so on; however, bracketing rules often lead to some deviation from this. The S-curve is most important for keeping each region balanced; ideally, each region will be equally strong. For example, the committee will try to ensure that the number 1 team on the seed list, the national #1 seed, will be in the same region as the weakest #2 seed. The committee tries to ensure that the top four seeds in each region are comparable to the top four teams in every other region. For example, if one region has the best #1 seed (#1 overall), the weakest #2 seed (#8 overall), the best #3 seed (#9 overall), and the weakest #4 seed (#16 overall), its seeds add up to 34, the ideal number. But if a region has the best team for every given seed, its seeds would add up to 28, and a region with the weakest team in every seed would add up to 40, making the two regions very unbalanced. It is extremely unusual that an at-large bid can be lower than a #12 seed, but it has occurred, most recently with Bradley and Air Force being 13 seeds in the 2006 Tournament. While the seeds are almost never perfectly balanced throughout the four regions, the committee strives to ensure that they differ from each other by only a few points.

In years past, the NCAA selection process has received its fair share of criticism from experts, coaches, players, and rabid fans alike (you all remember the grief Gary Walters took after leaving out the 'Cuse in '07). Brilliantly, the NCAA held a mock selection seminar last month where they invited 20 media members from around the country to learn the intricacies of the whole ordeal and help put together an NCAA bracket. As SI's Andy Staples reported, the selection process is an unbelievably grueling and complex procedure-- so exhaustive that any under the table dealing or conspiracies have no possibility of occurring. Stand down Duke haters.

This week, as we all take long lunch breaks to catch UCONN and Georgetown or fire up ESPN3 in class to peak in on the Big Ten Tourney, remember those ten brave souls in Indy who tirelessly cypher through thousands of MBs of information, vigilantly watch over 100 hours of college basketball, and in the end quietly send an email to hundreds of voracious media outlets who get all the glory of presentation.

Don't forget those ten. They're the ones that make the arguing and the gambling for twenty-one days so much bloody fun for the rest of us.