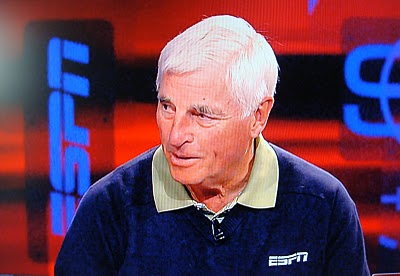 It's no secret that Bob Knight has a propensity for not thinking before he speaks, then not caring about the potential backlash that could ensue. It's been a staple of his schtick since he won National Championships at Indiana, attempted to rectify a middling Texas Tech basketball program, and has stayed with him as he meanders along at the Worldwide Leader.

The problem with Knight's angry flare ups in today's world is that there's little to no room for error. Nearly everything is documented, and nearly every citizen journalist has a handful of mediums he can pitch a scathing video and/or image.

Speaking at an event in Wabash, Indiana over the weekend, Knight's latest rant may actually result in some real consequences. There, The General dropped a major Unfounded Attack at Kentucky Bomb, calling out Wildcats head coach John Calipari and his talented 2009 crop of freshman for spending nearly the entire second semester skipping class. Sure it may be easy to believe, but the problem here is that Knight is way off here, subject to slander accusations that puts not only his own integrity, but his current employer, in hot water.

As the video went viral, nearly everyone in college basketball circles were ticked, forcing ESPN to pen an official apology for their analyst late this afternoon. Call it PR 101, but it's pretty easy to see through all this, and the situation is worsened because the statement doesn't quite address the real problem: that Knight probably flat out made something up.

So with Bobby's latest slip-up, I think it's safe to say that he simply can't be himself in this digital age. Too many smartphones and tweeters populate the world, all mighty eager to record the next statement a notable figure should not have said in public. I'm willing to bet that Knight dropped countless ignorant statements back in the 80s and 90s, but those antiquated newspapers had no space to make mention of them.

At age 70, Knight is completely blind to the changing world around him. Additionally, he likely has no interest in thinking before he speaks as a way to salvage any smidgen of respect still remaining from the generations of fans he is elder to.