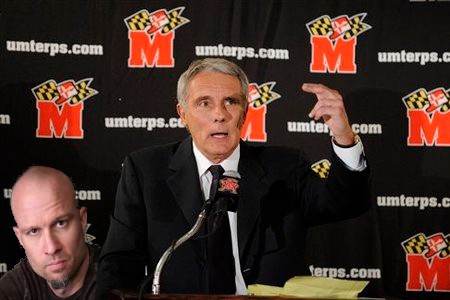 Ticked that North Carolina State AD Debbie Yow was apparently being hurled under the bus in her bid to fill the Wolfpack's head coaching position, CBS columnist and daily shit-stirrer Gregg Doyel unleashed an audible fury for the ages on Tuesday.

The target of his wrath, however, was mind-boggling. The shock value-inspired hipster set his sights on Maryland head coach Gary Williams, a man who has had a very rocky, and very public relationship with Yow in the past. Doyel accuses Williams of single-handedly sabotaging NC State's coaching search by bad-mouthing Yow to prospective hires. Yeah, this really happened. (via D.C. Sports Bog)

"Well, he has influence, and not because people think Gary Williams is so brilliant and trustworthy that if he tells me something, dadgummit, it must be true. I don’t think he has that much influence. I don’t want to give that little tiny little petty human being that much credit. And by the way, I e-mailed Gary’s PR director yesterday back and forth three times, saying I want to talk to Gary very specifically about his influence on the N.C. State coaching search. They’ve not gotten back to me after I made it clear exactly what I want, so it’s very possible he’s gonna duck me, that coward.

But in the meantime, the reason he’s had an impact is this: if you’re a good coach at a good school...it’s hard to pull the trigger and say 'I’m winning here at Arizona or Texas, or I’m winning here at VCU, wherever it is that I’m winning at, and I want to go to N.C. State, where they haven’t won the last couple years.' It requires a whole lot of confidence. And if you get one person — and that person’s Gary Williams — to say the AD’s not easy to work for, that will allow someone to justify their own feelings. Basically, Gary Williams is giving coaches an excuse to do the easy thing, which is stay where they are."

Of course! How dare a respected head coach like Gary Williams leave poor little Greggy out in the cold like this! I mean jeez, Doyel told you what he wants, so you better give it to him. Or else...

"I want to make this very clear, that if Gary Williams does not return my call, he’s scared of me. And so he can act all big and bad, and he can stand there on his coaching bench and turn around and yell at his assistant coaches, who've done nothing wrong. And when a guy on the court travels, he can turn around and yell at the 12th man on his bench, because he’s a little bit tiny coward runt of a man. He can do all that.

But here I am on your radio show, and in an e-mail to his PR guy three times, begging him to talk to me about what he’s been saying behind Debbie Yow’s back and hurting the N.C. State head coaching search. And if he doesn’t call me back, then all that means to me is he’s a little bity tiny coward of a man.

Gary Williams, you call me back, or you’re a spineless little fraction of a man."

Wow. Those be fightin' words. Let me be the first to suggest an American Gladiators style jousting match (best of 3?). The winner would not only get a nationally televised opportunity to shame the other, but they would likely move on to face Gemini for a chance at eternal glory. See? It's a win-win. Larry Csonka approves of this. And so do we.