Share All sharing options for: There are a lot of soon-to-be-college freshman named Shaquille 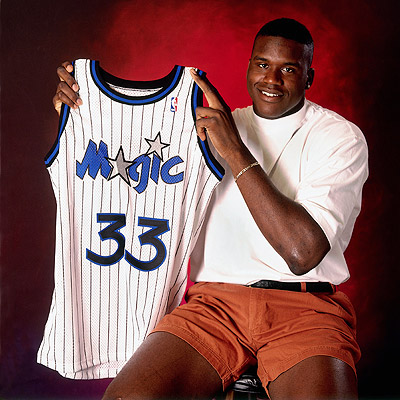 We've heard the story about former Washington Huskies guard Isaiah Thomas being named after the venerable Indiana Hoosiers and Detroit Pistons star. Back in 1989, Thomas' father, James, a LA Lakers fanatic, was so confident that the then two-time defending NBA champions would execute a three peat at the hands of the Pistons.  But injuries to the Lakers Byron Scott and Magic Johnson derailed that dream, and a new, Bad Boys regime was born in the NBA.

Owning up to the bet, his soon-to-be-born son was named after the two-time NBA champion.

Thomas' name - one that we have seen or heard before in basketball - is fast becoming more of a trend than an anomaly. As I occasionally peruse the long lists of Division I commitments every spring, more and more I am seeing recycled names appear.

In the past six years, we've seen two Josh Smith's chosen as McDonalds All-Americans. There's a new Terrence Williams committed to Charlotte; a new Jordan Williams headed to North Texas. A Brando(i)n Knight has run the point for both Pittsburgh and Kentucky in the past decade. The San Antonio Spurs' Tony Parker was just eliminated from the NBA Playoffs, but a second TP is currently mulling offers from a handful of BCS-conference schools. Sure the names aren't wildly unique, but this list is by no means comprehensive.

In addition, the most interesting re-use of a name is unquestionably the one that is over-population the top 200 lists of the class of 2011 and 2012, and that name is Shaquille.

The Big Daddy, The Diesel, Shactus, whichever you prefer, apparently inspired a number of new parents back in the early 90s to name their children Shaquille - after the then LSU star and highly-touted, extremely marketable Orlando Magic rookie center.

All which were born presumably between 1992-1994 (O'Neal's first two seasons in the NBA), the basketball recruiting class of 2011 features four star-ranked players with the first name "Shaquille," highlighted by Cincinnati Bearcats commit Shaquille Thomas - aptly from The Real Shaq's hometown of Newark, New Jersey.

But the player perhaps with the best chance to become the next Baby Shaq, or some one a bit bigger than Glen "Big Baby" Davis, is Shaquille Cleare of Houston, Texas. Currently listed as the one of the class of 2012's top centers, the 6'9" 280 pounder is a deft rebounder and has great hands (and one of more more "Shaq's" on the radar of Division I coaches), per Scout.com. A year away from graduating from The Village School, Cleare has yet to really narrow his college choices, but you can bet you'll be hearing from him.

So as we say so long to the current crop of college players, get ready to welcome in a new bunch, and a lot of lame jokes and statements from announcers making references and comparisons between these old and new Shaq's.