Assigned Reading: The Spectacular Life of a College Basketball Recruiter

Share All sharing options for: Assigned Reading: The Spectacular Life of a College Basketball Recruiter 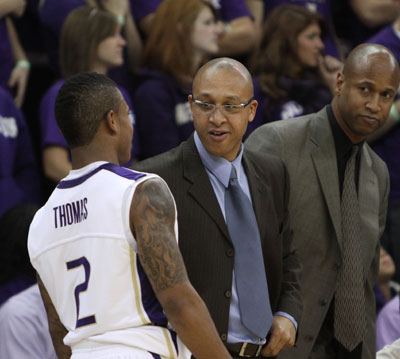 Like to work overtime throughout the entire month of July?

Have the disipline and tact to connect with ego-inflated teenagers?

Love eating Sonic by yourself on desolate Main Streets across the country?

If you answered "yes" to these questions, you may be silly enough to want to be a head college basketball coach. Because before you get to make enemies with the local media or wear something ridiculous for Midnight Madness, you have to work like a nomad at the request of your bosses, an incredibly unglamorous gig that is nicely profiled by Sports Illustrated's Bruce Schoenfeld in the mag's latest hard copy.

Starring Washington Huskies assistant Raphael Chillious (who, whoops, might be in a bit of hot water because of this piece), Schoenfeld describes the coach's job to land Lorenzo Romar's next star player as "onerous" and "unpredictable." I just describe it as a cautionary tale to young kids aspiring to man the sidelines for a major college basketball. Naturally, there's an underbelly to all this, as we also learn that it's becoming more and more difficult to land prized recruits with white hat tactics, but that should come as no surprise.

Chalk this up as just another reason to stick to blogging.