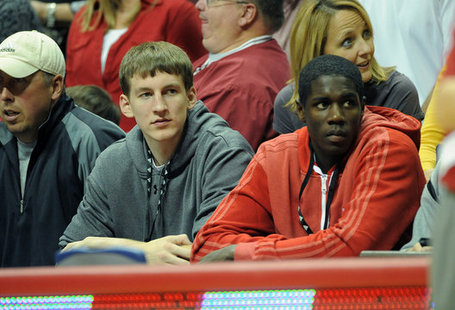 The crowning jewel of Tom Crean's 2012 recruiting class, power forward Hanner Mosquera-Perea's college eligibility could very well be in jeopardy. An in-depth report by ESPN's Mike Fish revealed that Perea received dozens of improper benefits since arriving in the United States in 2008 from a Mark Adams, president of the A-HOPE Foundation.

Adams, who happens to be the head coach of Perea's AAU team Indiana Elite, and the father of an Indiana basketball staffer who worked with the team at the time of Perea's recruitment, paid for a handful of the Columbian-born prospect's plane trips back to his home in Bogata. He also gave Perea numerous electronic devices as gifts throughout their relationship. Not surprisingly, some people back in Bogata started questioning where these luxuries were coming from over time.

The two men who discovered the basketball protégé in Colombia suspect Perea's commitment to Indiana might be influenced by gifts and treatment afforded him by Adams and others friendly to the Hoosiers. "They have dazzled him," Mauricio Ducuara, the head of a basketball foundation in Bogotá, told ESPN.com.

He says he learned of changes in Perea's lifestyle after the teenager returned home for Christmas this past December, saying through a translator: "People with whom I have spoken said he has received lots of gifts [and] things. If you knew how Hanner grew up the people don't even have shoes. Hanner came home at Christmas with iPods, iPhones, [Bose] headphones digital cameras. Things that for a kid are impossible."

While there's certainly a bit of a moral quandary here, a connection of this magnitude essentially forces the NCAA to investigate further into Adams' connection with Indiana, even though Perea has yet to sign an official letter of intent. And while Adams uses his A-HOPE Foundation for other players as well, when asked, two anonymous players reportedly had no knowledge of anyone ever getting flown back to their home country.

Rivals ranks Perea the 15th best prospect in the 2012 class, and the third highest player to verbally commit to a school this early in the recruiting process. Even though it's quite possible that Indiana knew of absolutely none of this and that Adams was merely doing everything in his power to help a poor kid in need, it doesn't mean these connections won't get put under the microscope in the coming months. Still plenty of time to sort this mess out, but this is not good news for Indiana basketball.