Share All sharing options for: Searching For: Neil Fingleton 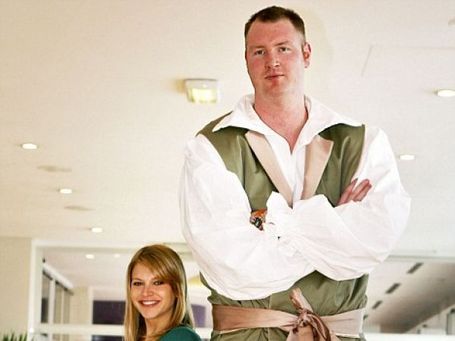 "Any American boy can be a basketball star if he grows up, up, up." - Bill Vaughn

When 7-foot-7-inch Neil Fingleton walked onto North Carolina's campus in 2000 as a McDonald's All-American, it truly felt like something special was in the works. Head coach Matt Doherty and his team were still reeling from a Final Four loss to Florida the previous season, but many around the program were confident that Fingleton's commitment alone could one day act as a difference-maker. His potential, they all said, was endless.

At a time when overseas recruiting felt like it morphed from a brisk walk to a high speed chase overnight, the act of uncovering a seemingly raw seven-footer became the new rage in college basketball. Everyone wanted the next Shaquille O'Neal, the next Tim Duncan, the next Bill Russell. And if they couldn't land the best of the bunch, then they'd just have to mold one of their own from scratch and pray to hit a jackpot.

Are you seven feet tall and can dribble a basketball? How does a free college education sound?

This influx of size not only saw lesser schools routinely hand out scholarships to behemoths who could barely run the length of the floor, it also began to alter the way prep players were viewed on a year-to-year basis. Clearly ignoring the time-tested knowledge that only a handful of seven footers from any given recruiting class will ever become successful, the preceding hype never managed to dissipate by the time the next batch of youngsters came around.

Instead of touting the 25 ppg scoring guard from a state title winning high school, it was the 7-foot-2-inch kid from Ames, Iowa who just started organized basketball two years ago that was garnering all the hype. Or the 7'3" "prodigy" from the Congo who climbs mountains in his spare time. Even in freshman classes where no great big man seemed to exist, there they were, flooding the top 50 rankings by the dozen. Potential might be the queen of college hoops, but size will always be the resident king.

Neil Fingleton was never short on that potential thing. His problem, much like other players his size, was staying healthy. Back surgery abruptly halted his Chapel Hill debut in that first year, and he came back as a redshirt freshman just as green as he was the previous season. By the end of the fall semester in year two, with most of his career being confined to the bench, Neil finally headlines when he put in a for a transfer. And with exactly four minutes of court time to his name and as a constant injury worry, the school happily obliged and allowed him to walk to Holy Cross. 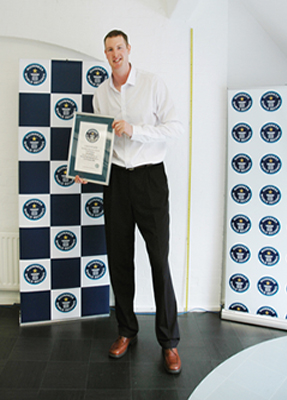 After two uneventful years with the Crusaders (he averaged roughly seven minutes per game), Fingleton graduated school and left for Europe with a year of eligibility still left on the table. Most others in his situation would have used the free season to focus 110% on basketball in hopes of making a run at the pros the following year. Despite statistical production that was miles away from what many "experts" predicted he would be capable of at the college level, Neil effectively finished his studies and turned into a professional basketball player anyway. A momentous achievement considering the circumstances.

Fingleton spent a short time bouncing around between various leagues, but his big break came in 2007 when Guinness World Records officially measured him as the tallest British-born man alive at 7-feet and 7.56-inches. No longer committed to the hardwood, the notoriety helped Fingleton land acting roles in a pair of local documentaries about those who are especially large in stature, in which he quite obviously flourished.

Hoping to move to Los Angeles in order to begin an acting career after hoops, the snowball effect continued and Neil was soon offered the role of a bodyguard in the film X-Men: First Class. And just to prove this isn't just all one big fluke, Fingleton is currently in development with Keanu Reeves on a 2012 samurai movie called 47 Ronin.

From McDonald's All-American to an over-hyped washout to a budding presence in million dollar Hollywood films. Full circle indeed.