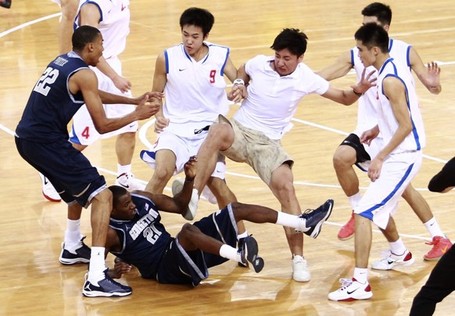 /buries the lede, in a way

By now you've seen (here's the grainy video) or at least heard about a wild scuffle between the Georgetown Hoyas and Bayi Rockets in Beijing. The game ended about nine minutes early, but punches were thrown and chairs were introduced as weapons well beyond regulation time, as some sort of diplomacy building game really may have just incited a contentious relationship between the two countries.

Hopefully, this doesn't extend into our respective governments.

Per a fan attending the game, recounting what he saw in great detail over at HoyaTalk.com:

The whole thing came undone in the third. About two minutes in, the ridiculously lopsided foul calls continued (we were in the bonus again 2 1/2 minutes in) and the first real shoving match kicked off over a loose ball. The players on the court separated each other pretty quickly, but then the craziest thing I've ever seen happened- one of the Bayi big men got in JT3's face and almost took a swing. He was so shocked he didn't know what to do. So that upped the ante a bit.

From there, the Hoyas put on a full-court press despite the number of fouls being called on them. Then,  a player popped another player's personal space bubble, and here we are; discussing a basketball game in mid-August.

Surely the Rockets entered the game with some pent up emotions, overly anxious to flex their muscles against an opponent from the United States.

Some possible reasons for this incident or may not include:

Besides the lopsided number of fouls being called on Georgetown, who knows what got lost in translation on the court to let the drama escalate to what is pictured above.

As for that 64-64 tie...let's just hope it isn't settled with soldiers and aerial attacks.