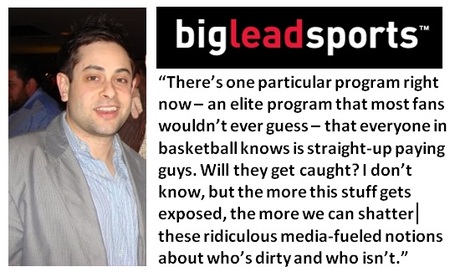 The Big Lead's foundation is built on an impressive collection of Q&As from a wide-range of sports media types.

The latest installment in this series from Mr. Jason McIntyre is with The Daily's Dan Wolken, a former Commercial-Appeal columnist who cut his teeth covering the Memphis Tigers and college athletics on the whole.

As part of the latter, Wolken dropped the above statement, a great "I can't tell ya but I'm telling ya" nugget that is hardly surprising, but hardly something to be overlooked. Saying a program is "straight up paying guys" is bold, especially when it's allegedly backed by an entire league of basketball reporters who know it's happening, but has yet to be revealed to the public.

I'm not here to speculate what program it is, but Wolken's revelation is what stood out most to me in an exceptional back-and-forth on a few college basketball-related discussions.