Ricardo Ledo's cancellation is a bad omen for Providence

Share All sharing options for: Ricardo Ledo's cancellation is a bad omen for Providence 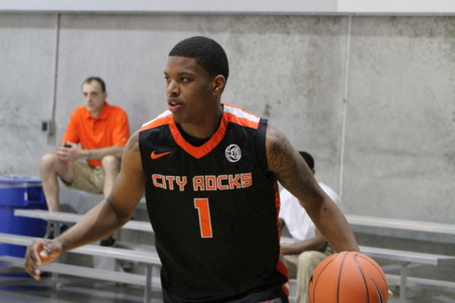 Ledo, a consensus top 10 recruit, was planning a three o'clock Thursday presser at Ladder 133 Bar & Grille, just down the road from the Providence's campus. And while this event alone was apparently enough to assure one local writer of Ledo's decision, it's pretty hard to imagine the kid would have the stones to pick anybody other than the hometown flavor in that setting. It felt like a lock. Almost.

But now, right when fans were legitimately starting to feel giddy about Ledo's arrival, the highly-touted recruit goes and calls the whole thing off. Oops.

The 6'6" guard sent out a brief text message, saying "It is cancelled. Please pass that around." His abrupt change both prolongs his decision and adds yet another mystifying turn to his public recruitment. Ledo only recently trimmed his list of prospective schools down to five, with Syracuse, West Virginia, Kentucky and Connecticut all chasing at the Friars' heels. The race for the coveted scorer, it appears, is back on.

In the complicated world of college basketball recruiting, it's hard to figure out what to make of this. Ledo has bounced around from high school to high school at a concerning rate as a prep, and it's safe to say that many scouts would classify his off-the-court issues as a red flag.

On the surface it appears like the big boys on the block have caught up to Providence in the recruiting battle and Ledo is wavering pretty hard. And while you hate to say it, we're definitely in the part of this process where bad things can happen if greedy people make dumb decisions. In the end, it all comes down to whether those in Ricardo's ear are giving him sound advice.

The Friars don't need Ledo in their quest to become a Big East contender, but he represents a recruiting and talent benchmark that this program hasn't seen in a while. That's why this is such a big deal on the national landscape. Dunn alone was a kickstart in the right direction, but Ledo is truly a unique basketball player, and might just be the type of kid that can help lead Providence to a place they haven't been in ages. At the very least, inking Dunn proves that Cooley is determined to put in serious work on the recruiting trail.

Fans in West Virginia, Syracuse, Kentucky and Connecticut have a good reason to crack a beer over this news, as it's clear that somebody has caught up with Providence in Ledo's mind. As far as Cooley is concerned, he's got four of the best recruiters in the business threatening to swoop in and snag his local star right out from under his feet, and that's never a good situation. Because for John Calipari, Bob Huggins, Jim Boeheim, and Jim Calhoun, it's almost as if Ledo is ripe for the taking at this point. And honestly, how long until the hotshot recruit spurns the upstart program for a powerhouse team with the Hall of Fame coach?

This was supposed to be one of the best weeks in the history Providence basketball. Instead it feels like the main prize of it all might be slipping away. Only time will tell, to be sure, but the longer this process drags out the worse it feels for the Friars' chances.