Syracuse and Pittsburgh to the ACC has serious basketball implications

Share All sharing options for: Syracuse and Pittsburgh to the ACC has serious basketball implications 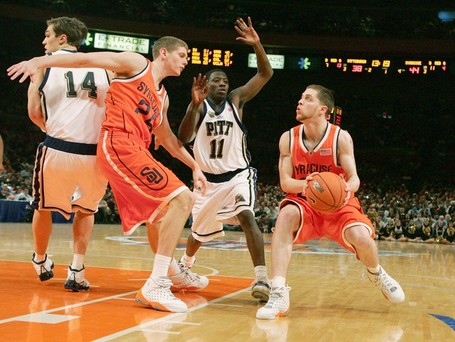 Driven entirely by football up to this point, the conference reshuffling that has been occurring infrequently and discussed ad nauseum for the past 18 months now has cast its line on college basketball.

After years of building deep roots in the Big East, Syracuse and Pittsburgh are now figuratively heading south for the ACC, in a move that I believe reshapes the basketball landscape far more than that of what's played on a plot of grass.

Early adopters are already tweeting and Facebook-status-updating the reality that Duke and North Carolina will now soon be making annual trips to the Carrier Dome (pretty cool), and that Pittsburgh will now build an intense rivalry with Maryland or some other second tier team (sort of cool).

But is this move towards a super conference really what's best for all parties involved? That remains to be seen, but here's how I know it will change what we're accustomed to:

I'm not going to prophesize about the next axe to fall for conference realignment here. But I do know that this should be viewed as more of a basketball move than a football move, and that's sort of cool.

Meanwhile, TCU is likely freaking out down in Fort Worth.