The Morning After Recap: Wednesday, January 11

Share All sharing options for: The Morning After Recap: Wednesday, January 11

Toss out the polls, records and recruiting rankings, conference play is college basketball's ultimate field-leveler. On Tuesday we saw two heavy favorites, Ohio State and Louisville, each walk into enemy territory and get promptly smacked in the mouth. Both were eventually sent packing with losses before the night was out, leaving fans of the two powerhouses to pick up the pieces.

These two unexpected outcomes might tell us a little something about the programs who actually pulled off the upsets, Illinois and Providence, but we learned more about the level of parity in college hoops right now. From where we sit, anyone outside the top three is susceptible to getting tripped up on virtually any given night, and that has traditionally not been the case.

Don't expect the upsets to stop flowing in, either. This is conference play, people. This is college basketball's time of the year. And best of all, we're just getting started.

* VT guard Erick Green: "Florida State’s a good team, I just wish we would’ve come to play 40 minutes instead of one half." (VT Collegiate Times)

* Phew, that was close. Still undefeated. But bearly. (Our Daily Bears)

* Can't say it much better: "Illinois was a ten point underdog on its home court, but would not lie down, and weathered the blistering scoring barrages of the Buckeyes." (Hail to the Orange)

Illinois - Much of the Fighting Illini's historic night needs to be credited to Mr. Paul, but this was truly one of the best defensive performances we've seen out of this program in a while. Big man Meyers Leonard gained about three years of confidence from his successful post battles with Jared Sullinger alone, and you really can't overvalue something like that going forward. The most amazing thing about this win was how legitimately unexpected it was, with Ohio State coming in looking to assert its dominance and everyone assuming this would be a route. What we have now is a dogfight in the Big Ten, and this pesky Illinois group is right in the heart of it all.

Louisville - There's a perfectly normal way to lose to a lesser conference opponent, but what the Cardinals did on Tuesday hardly qualifies. Rick Pitino's squad walked into the Dunkin Donuts Center looking to even things up at .500 in Big East play, and were quickly, and rather swiftly, run out of the gym by their gracious hosts. The 43-25 halftime deficit was bad, but seeing the Cards come out flat and look even less interested after the break was much, much worse. You want to talk about a resume killer? A 31-point defeat to Providence is a pretty good start.

59 - Free throws attempted by Washington in a turf-war with Seattle. 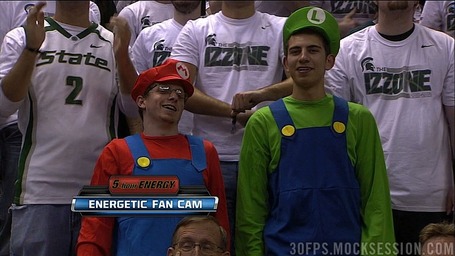