Share All sharing options for: Satnam Singh Bhamara and the familiar hype of basketball's foreign explosion 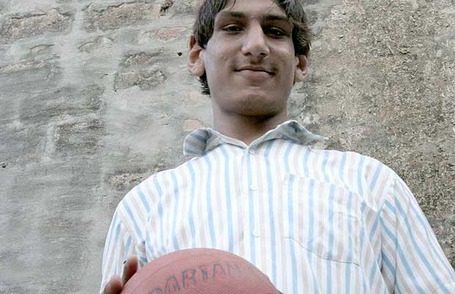 Behind soccer, basketball is truly the international sport. But when it comes to the very highest levels, the NCAA and NBA, it's still very much dominated by Americans.

The latest attempt to capitalize on an untapped international market is told by Mark Winegardner of ESPN the Magazine this week, in his piece "One In A Billion" about 16-year old 7-footer Satnam Singh Bhamara and the NBA's efforts to introduce the game to the exponentially-growing population in his native India.

The article vividly describes his unique build, quickly developing skills, desire to make his career in basketball and the challenges that come with that lofty goal. Satnam is now playing at the IMG Basketball Academy in Florida, and the powers that be hope that he can serve as the sport’s new ambassador to India, a la Yao Ming.

Now, the piece is a must-read for his descriptions of the globalization of basketball and the alluring prospect of Satnam (who could spark a recruiting gold rush if he's everything the article says). But it falls terribly flat in two areas.

One, downright condescending and paternalistic descriptions of native Indians who apparently believed that Satnam’s passion and ability for basketball were due to "magical powers." Are we still doing this, in 2012? Nothing could make a foreign culture, a rich and beautiful one at that, seem so primitive and downright stupid.

The article actually infers more than once that Satnam’s basketball skills and even ability to quickly learn English had something to do with magic.

Satnam clearly worked his ass off on both accounts and Winegardner – and/or his editors – should be ashamed for dismissing him and his native country in such an obtuse manner.

Second, the article acts like this is the first time anyone has ever tried to bring basketball overseas. It’s not like the NBA just realized three years ago that there are countries outside of the United States. The article contains some fascinating tidbits about the way that international programs are set up, and talent is discovered and developed in foreign countries. But to truly foster an explosive influx of talent, you need coaching and you need passion.

The best basketball players come from the United States because both exist here. In some places, you might have the talent but basketball might not be a dominant sport, so not as many kids are going to pick up the ball. In other places, such as China or the Philippines, you have kids that come out of the womb dribbling a ball but little access to proper coaching. You need both. And India has little of one and none of the other.

Even if Satnam makes it, his success does not guarantee that Indians will take over the NBA. How many Chinese players have played in the NBA or college since Yao? How many Brits since Luol Deng and Ben Gordon? We all had Rubio-ners back in 2009, but so far there haven’t been too many Vicky Christina Barcelonas on the domestic scene.

India and the pipeline to college basketball

It gets a little more interesting when we’re talking college basketball – which, of course, we are wont to do here at SFBE.

International recruiting is nothing new. Texas has created an exemplary program in Canada; St. Mary's marched to the Sweet 16 in 2010 with a slew of Australian talent.

Non-profit organizations - some shady, some trustworthy - are helping bring foreign talent to American prep schools. This helps green kids get assimilated to western culture and fuse fundamentals with raw talent. After a few years of seasoning, the foreign player is far more appealing to a top flight college basketball program.

Soon, more Brazilian players like Syracuse's Fab Melo will spend time at an American university before dipping their feet in the NBA. College athletic departments increasing their recruiting budget to cover foreign territory, like South America, Asia and even Africa is becoming more commonplace, if not already the norm. Based on this trend, and a growing Indian population of 1.7 billion people, it will be interesting to see if their efforts ramp up in India, though it may take years or a decade to see the investment pay off with talent.

In his fantastic 2002 book "Big Game, Small World," Sports Illustrated writer Alexander Wolff traveled to Angola and raved about the performance of a 16-year old Ivory Coast guard named Michael Lasme. He looked like "Earl Monroe brought back to action," wrote Wolff, ever hyperbolically, but the best quote came from a recruiter with Fairleigh Dickinson University:

"But the day someone builds a basketball academy here, it’ll be like the day they opened up Puerto Rico, Venezuela and the Dominican Republic to the major leagues. I mean, puh-leeeeease."

Lasme eventually went on to score 7.5 ppg in 28 games at UMASS in the 2002-03 season (though he suffered a broken wrist and didn’t play D-1 ball again), but the influx of African talent never happened, at least not on the scale that Wolff and the scout predicted. No one doubts the untapped talent throughout Africa, or China or India or Australia or Mars. But it’ll take more than a Yao Ming, or a Michael Lasme or a Satnam Singh Bhamara to truly make the NCAA global.