The Morning After Recap: Thursday, January 12

Share All sharing options for: The Morning After Recap: Thursday, January 12

About a month ago I wrote an article centered around Maryland sophomore Terrell Stoglin, and how he's altered his style of play to fit his team's needs in his second season. The underlying theme of my piece was that Stoglin couldn't continue to take as many shots as he was currently taking (37.1% shot percentage, at the time), and still provide something of worth as the Terps' star point guard. And it made sense. When the best passer on any basketball team is taking the bulk of the shot attempts, it's going to have an effect on the team down the road.

Last week after another loss, and yet another contest that felt like Stoglin went 1-on-5 with the opposing team, head coach Mark Turgeon put his concerns on the table. "We’re not going to win if he doesn’t trust his teammates more," Turgeon said. "We’re getting better. He has got to trust 7'0" center Alex Len, because Alex can make a play."

That's why after hearing the news that Stoglin would come off the bench for Wednesday's game due to 'disciplinary reasons', it only seemed logical that the cocky kid was simply unwilling to buy into Turgeon's "let's pass the ball more" approach to his team's offense. So while Turgeon's decision to keep Stoglin off the court during the opening tip looked like nothing more than a slap on the wrist, especially when you consider that he still managed to play 34 minutes and jack up 18 shots, something truly different happened as a result: The Terps won.

Keeping Stoglin on the bench probably isn't the way to go, but keeping his ego in check absolutely is. It took a while for Turgeon to reel in his erratic scorer, but now that he has, it's likely we'll see better basketball from Maryland as ACC play heats up.

* Mark Turgeon on Stoglin benching: "I’m trying to make Terrell a man. There are responsibilities out of basketball you have to do. We’ll see if it helps him. It’s nothing major, but the kid needs to grow up." (Washington Post)

* Calipari: "At one point I looked at the staff and said, 'this has nothing to do with X's and O's, boys. We could be going down.'" (A Sea of Blue)

Xavier - Now this was exactly what the doctor ordered. A game where the outcome was long decided before the final buzzer. Chris Mack's frustrated program, in search of a motivational boost of any kind, wrapped up Wednesday's game with Duquesne quite literally in a matter of minutes, and it couldn't have felt much better. Xavier took an unbelievable 44-16 lead into the locker room before hitting the cruise control button and letting the second unit get some run. The most promising sign of the night, aside from any of the Zip 'Em Up variety, was clearly Tu Holloway's 11:1 assist to turnover ratio. We're still of the belief that the Musketeers are much more difficult to beat when Holloway is flirting with double-digit assist totals so he can stay as fresh as possible for clutch late-game situations, so a performance like this was a strong sign of things to come.

Pittsburgh - Getting knocked off by Rutgers is probably an acceptable fate every now and then, but certainly not under these circumstances. Not when you score 39 points and brick virtually every shot that happens to leave your hands. Jamie Dixon's Panthers didn't just lose by nearly two-dozen points in a game that was never close on Wednesday, they were absolutely annihilated by a program that has no business annihilating anybody. It was the brain-melting 21.1% field goal shooting as a team that paved way for Pitt's single-worst home loss in ten years. Somebody needs to turn this ship around.

Andrew Nicholson-St. Bonaventure - Every bit the 20-point per night scorer a year ago, Nicholson has had a frustrating season so far in 2011-12. The senior forward came into yesterday's game riding a streak of eight straight contests without hitting the 20-point plateau. But with A-10 rival Dayton coming to town for a key league game, Nicholson finally rose up to the challenge and proceeded to stamp his name all over the box score. Along with a season-high 30 points and stellar free throw numbers (10-for-11), the Bonnies' marquee man chipped in 13 rebounds, six blocks and two steals, all in just 34 minutes on the court Wednesday. Is this the game that finally gets Nicholson back on track?

0.304 - Buffalo's team assist to turnover ratio in a loss to Ohio. The Bulls finished the night with 23 giveaways and just seven assisted baskets. 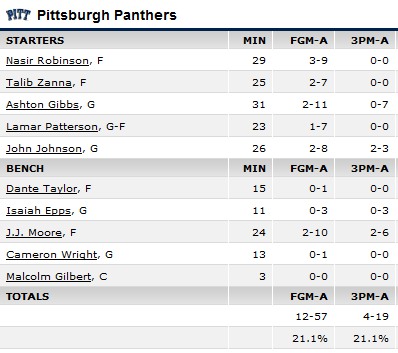 Enjoy this, all you Pitt haters. It really can't get much worse.