Who is Deividas Dulkys and what did he just to do North Carolina?

Share All sharing options for: Who is Deividas Dulkys and what did he just to do North Carolina? 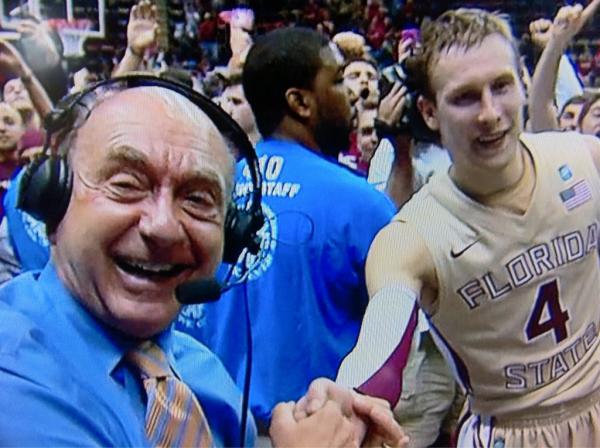 Coming into today, you probably didn't know the name Deividas Dulkys. Unless you went to FSU, scouted Lituhunian players, or just watched an inordinate amount of college basketball, Dulkys was just another white guy who came in with the main objective of shooting three pointers.

Through 16 games the 6'5" senior guard - whose name is pronounced "David Us Duel Keyys" - averaged a pedestrian 6.1 points per game in 21 minutes of run for a middling ACC club.

Beginning now, and for the interim at least, this kid's life has changed. Following Florida State's "dismantling" of No 3 North Carolina, Deividas Dulkys is Tallahassee's BMOC until otherwise noted.

Dicky V even has a Twitpic to affirm that.

Today Dulkys went HAM, leading the Seminoles with 32 points on 8-10 shooting from beyond the arc. Both, as you can imagine, were career highs for the senior who has cut his teeth for Leonard Hamilton the past four seasons and 112 career games.

So who is this kid?

Well for starters, perhaps stereotyping him as "just another white guy who likes to shoot" understates his abilities. His sophomore season, Dulkys was third in the ACC in 3PT shooting percentage, and he's currently in position to challenge the current FSU record for three-pointers made in a career.

After today's game, he's 75 made three-pointers away from claiming that distinction. Somewhat of a long shot as he would have to average more than four three-pointers a game for the rest of the season, but this should at least give you some perspective of Dulkys shooting acumen.

Ranked as a top 70 player in the class of 2008 by Scout.com, Dulkys left his home country of Lithuania in 2005 to assimilate himself to the United States, improve his game, and work towards receiving a Division I scholarship. He settled in at the notorious Findlay Prep in Las Vegas.

Living away from his parents and with a host family was not the easiest for Dulkys, but the opportunity to play for a high level, nationally traveling prep program was exactly what he needed to get in front of college coaches.

Currently a member of the Lithuanian national second team, it appears as though Dulkys has a long European career waiting for him following college graduation. As he continues to mature, he's also likely to find a spot on his country's national team and compete in Olympics and FIBA World Championships.

First, however, he's got plenty of work left to do trying to help get his Seminoles back to the NCAA Tournament.