The Big Ten is a complete circle of parity

Share All sharing options for: The Big Ten is a complete circle of parity 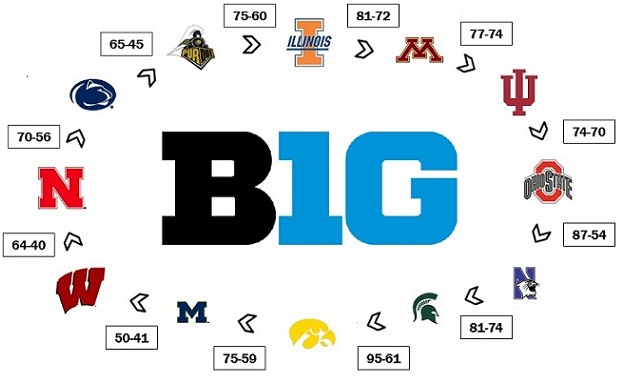 Do you like a level playing field? Mediocrity perhaps? A league that has no front runners and no bottom feeders?

If so, then Big Ten basketball is for you! Just look at this hastily made flow chart that shows the parity that has spread to all corners of the conference. Two weeks in to conference play and we probably have less of an idea of how this league will shake out than we did back in August.

The pieces for this sort of graphic really fell into place yesterday, following Michigan's loss to Iowa and Michigan State's loss to Northwestern. Yes, I know it's cliche, but it's also fact that securing in-conference road victories is incredibly difficult. Both the Spartans and Wolverines had an opportunity to create a bit of distance, at least for a few days, from the rest of the field, only to stumble in a road atmosphere and keep nearly every team within striking distance from one another.

This league is absolutely bonkers, you guys.

That show "The Journey" is going to be can't miss stuff.