The Morning After Recap: Thursday, January 26

Share All sharing options for: The Morning After Recap: Thursday, January 26

What in the world are we supposed to make of these Oklahoma State Cowboys?

Fresh off a monumental upset of the nation's second-ranked team, Travis Ford's group now sits at 10-10 overall and 3-4 in Big 12 play. Heading into the year, this was a roster we figured would flirt with the upper echelon of the conference for most of the season. And somehow, despite a series of swings and misses throughout non-conference play, here they are.

Aside from Missouri, Ford's team still hasn't picked up a win over a relevant program in 2011-12, and that's really the biggest problem when it comes to something crazy like an at-large possibility. The Cowboys' resume, sadly, is highlighted by wins over Missouri State, Tulsa, and SMU in non-conference games, and Oklahoma and Texas Tech in league games. Tossing Missouri into that mix is like plopping a bright red cherry on massive bowl of shit; even if the presence of said cherry proves to be too enticing for some to resist.

Yes, there were plenty of things to like about Oklahoma State's performance on Wednesday, but let's be real here. Everything we've seen from this team indicates there is a much better chance of this being a one-game anomaly instead of some season-altering jumping point. The Cowboys still don't have a track record of success against schools of the same, or even a slightly-lesser caliber, and that alone is pretty hard to ignore. A great win, no doubt, but this team's immediate future isn't as bright as people may think.

* A long-awaited court-storm in Stillwater as Okie State stunned No. 2 Mizzou (The Daily O'Collegian)

* Sick performance: UNLV's Mike Moser snagged 21 rebounds on a day where he was quarantined from the team with an illness (Las Vegas Sun)

* Bunny Colvin's Seminoles are one of the hottest teams in America. Will a full week off cool them down? (Tomahawk Nation)

BYU - Dave Rice's basketball team knows full well what lies ahead. Over the next week the Cougars have to face both St. Mary's and Gonzaga, the two obvious stars of the West Coast Conference. That's why it was so significant for BYU to take care of business last night in a borderline-trap game vs. Virginia Tech. Playing all the way across the country as the unwanted visitors of a power conference opponent, Rice literally couldn't ask for a better test run in preparation for next week.

West Virginia - Player of the year contender Kevin Jones (26 points & 14 rebounds; nine offensive) did all he could statistically, but one man wasn't enough to get WVU past St. John's at the Garden on Wednesday night. Jones' teammates were the real story here, combining to shoot just 29.5% from the floor in a flat, uninspiring performance. Instead of staking a serious claim by moving to 6-2 in the Big East with a win, the Mountaineers sit at 5-3, stuck in a logjam with the majority of the league.

Le'Bryan Nash-Oklahoma State - The highly-touted freshman has been solid, but far from spectacular in his first year of college hoops. Last night, however, Nash was flat-out special in an Okie State upset of No. 2 Missouri. The kid set career-highs in points (27), field goals made (12), three-pointers (3), and assists (4) in the nationally-televised win, and legitimately seems to be gaining confidence by the game as OSU's lead-scorer. The 6'7" wing has now dropped 20+ in four of his last seven games, so it's clear he's starting to figure things out. More nights like this could be on the way.

5:1 - Richmond's assist-to-turnover ratio in a 44-point win over Fordham. The Spiders tallied 30 assists as a team and gave the ball up just six times. 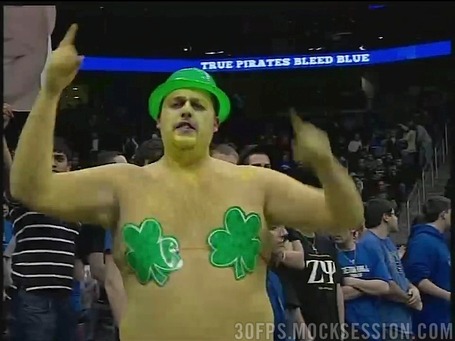