Share All sharing options for: Ricardo Ratliffe knows little beyond the charge circle 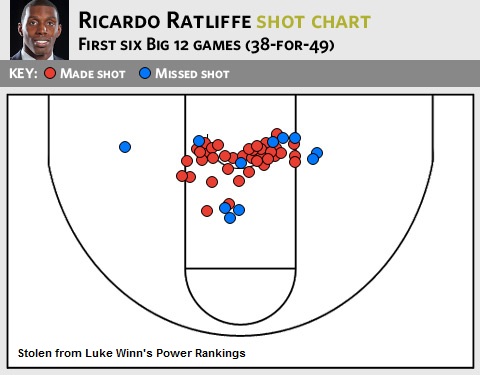 While some remain skeptical, there really should be nothing to discourage you from thinking Missouri isn't a Final Four caliber team.

Watching them handle (don't let the one point margin of victory fool you) Baylor last Saturday, it was clear to me that being undersized does not really matter to the Tigers. I originally thought otherwise, but Frank Haith's four-out one-in offense with that personnel of players seems to be working just fine.

I've also noted that Ricardo Ratliffe may be the luckiest player in the entire country this season, to the point that he should be buying his teammates lunch every week as a thank you. Originally planning on playing second fiddle to Laurence Bowers, Ratliffe is now the Tigers only real frontcourt player, and he's posting record setting FG numbers in this fortuitous role.

When looking at the shot chart above, manually created by Sports Illustrated's Luke Winn, the obvious observation that Ratliffe is the beneficiary of an excellent group of dribble drivers is confirmed.

Through six conference games this season, Ratliffe has continued his abnormally efficient shooting percentage. Despite being the second leading scorer on the team, Ratliffe isn't a big part of his team's offense. His 49 FG attempts in Big 12 play account for only 20 percent of the Tigers two-point shots, yet he's still getting a ton of pub for what he's doing this season.

But step out beyond the walls of the charge circle and Ratliffe probably feels as though he's been transplanted from Columbia, Missouri, to Cheras, Malaysia. Of his 11 misses in conference play, six have come from far reaching distances of 5-7 feet from the basket. Additionally, as noted by Winn, the big man has attemped a grand total of three shots with both feet outside the lane!

I don't mean to hate on Ratliffe's offensive game, I just find it comical. He could be missing many of those shots, you know, and he also ranks as one of the conference's top rebounders.

If Mizzou cuts down any nets this year, Ratliffe will definitely be a big reason why.