The Morning After Recap: Sunday, January 29

Share All sharing options for: The Morning After Recap: Sunday, January 29

There is a reason why crazy individual scoring outputs usually come from losing teams. It doesn't always happen this way, but enough to keep reminding us how deceiving the numbers we cherish can actually be. For the most part though, when one player is carrying his team, it's bad for business. Even if the kid is setting the nets ablaze left and right, the most successful formula for winning a basketball game is not to go 1-on-5 each trip down the floor. Rocket science, I know.

Interestingly enough, Saturday gave us three standout performances from players whose teams each fell on the wrong side of the scoreboard. Sacred Heart's Shane Gibson, after a 41-point showing in a one-point loss to Mount St. Mary's, was obvious star of the day, but we'll get to him a little later on.

* Coolest upset of the day: Colorado State blew past SDSU for its first ranked win since '04 (Reporter Herald)

* Not his brightest hour: Official Karl Hess was the story from 'Cuse-WVU (Nunes Magician)

* Tony Wroten Jr. saved the day, and the win, with a blocked layup in the final seconds (UW Dawg Pound)

Iowa State - Pandemonium in Ames! The Cyclones surprised the hell out of everyone and knocked off No. 5 Kansas. Don't look now, but Fred Hoiberg's team is 5-3 in league play, and might just be peaking at the ideal time. The win added yet another memorable inter-league court storm to our 2012 collection, a highlight reel that has been expanding quite rapidly over the last two weeks.

Dayton - Only days ago some pundits were calling the Dayton Flyers one of the sport's most pleasant surprises. Now? Not so much. Yesterday, at home, coming off a bad loss to St. Joe's, and facing a winless A10 squad in Rhode Island, everything appeared to be in place for a Dayton bounce-back game. Instead, the Flyers gave up an astonishing 53 second half points and choked away a lead to a team that currently sits at 4-18 on the year. Fools gold. And yes, I totally saw this coming.

Shane Gibson-Sacred Heart - This section is usually reserved for players who won their game, but it seems like Gibson deserves a free pass here. After all, how on Earth can you blame this kid when he scored more than half of his team's points? Rarely can any athlete, in any sport, walk into a losing locker room after the game and know with 100% certainty they contributed more than every single teammate combined. Final tally: Gibson 41, Sacred Heart 39. 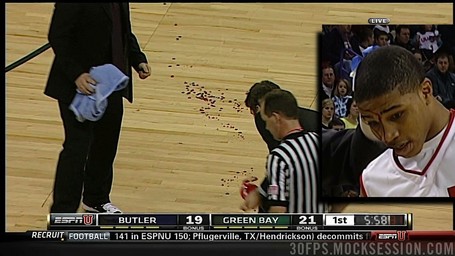 Green Bay freshman Keifer Sykes' head wound blew the UFC on Fox event out of the water, gore-wise (via 30FPS)